Kardashian-Jenner clan laughs all the way to the bank 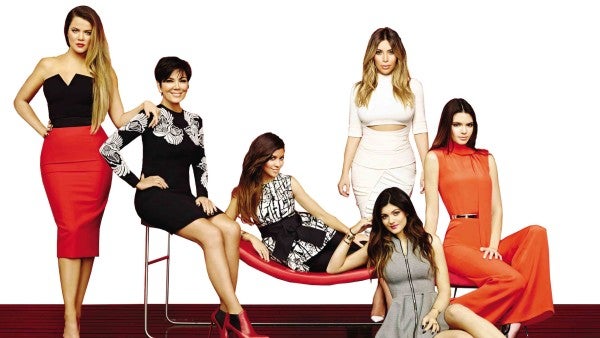 KARDASHIANS. Has succeeded in parlaying its massive fame and notoriety into communal TV superstardom.

In 2007, the Kardashian family was best known for its late pater familias’ having been the lawyer of OJ Simpson—and his widow marrying sports hero Bruce Jenner. But, producer Ryan Seacrest astutely saw a potential goldmine in Kris and her dishy daughters, so he put them on TV by way of “Keeping Up with the Kardashians” on E!.

How do you keep reality shows about a big, fractious family “famous for being famous” viewable? That’s a tall order especially on “Keeping Up with the Kardashians,” which has had over a hundred episodes on E!

Its successful, long-running stint began with a firm focus on Kim, who had just become controversial by way of a sex video.

The scandal made Kim “hot” viewing for a time, but when its notoriety began to pall, other viewing “hooks” had to be found, created  and exploited:

Kim’s running arguments with her mom-manager, Kris, about how to keep her career eventful; Playboy magazine’s offer to put Kim on its cover; Khloe getting arrested for a DUI.

Plus: scandalous photos of Kourtney surface; Kim is accused of becoming a diva and has to defend herself; the sisters’ store, Dash, is vandalized; mom Kris is furious with Khloe when she goes to jail for violating her parole; Kim performs with the Pussycat Dolls; Khloe gets a DNA test to see if Kris is her real mother.

More: Khloe faces pressure about her health; Kourtney catches her “baby daddy,” Scott, cheating on her; Khloe and Lamar Odom get married; Kris upsets husband Bruce by not allowing him to make financial decisions—etc., etc., etc.!

Those early conflicts were enough to make the show a hit, resulting in the spinoffs listed at the start of this piece. Additional viewing interest was generated when the youngest girls, Kylie and Kendall, became tween and teen idols in their own right.

And, of course, the show’s ratings went through the roof when Bruce Jenner decided to go the transgender route and become a woman, Caitlyn, resulting in the latest spin-off miniseries, “I Am Cait,” which has become a big hit in its own right and is now on its second season!

In the long process, new personalities have joined the original “mother” show, including boyfriends, spouses, children and sundry other relatives, with Lamar, Scott and Kanye West figuring most prominently in the ensuing and resulting complications.

The Kardashian-Jenner clan may have initially been “famous for just being famous,” but it’s succeeded in parlaying its massive fame and notoriety into communal TV superstardom—and is laughing all the way to the bank!