Chloë Grace Moretz on challenges of dating another celebrity 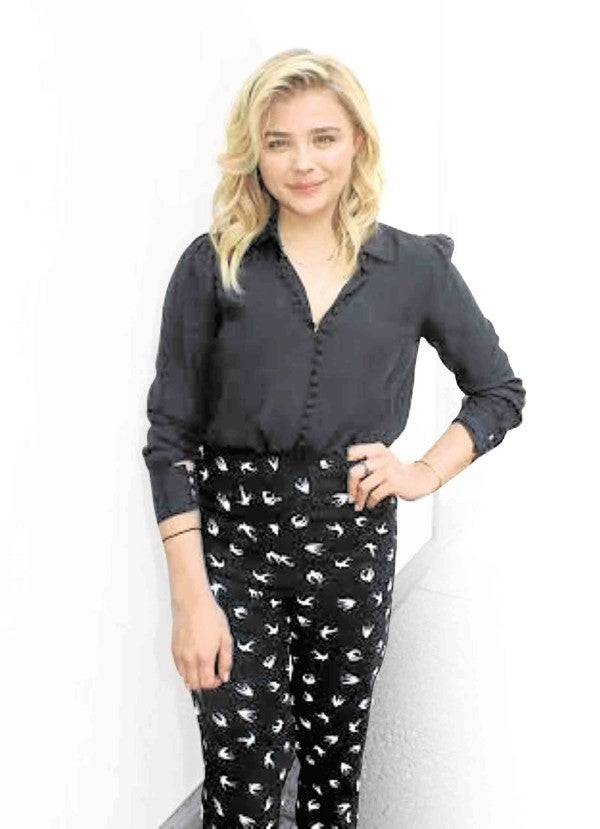 LOS ANGELES—From a girl who appeared in dark movies, some of which she herself couldn’t watch because of her young age, Chloë Grace Moretz, 19, has transformed into a young woman with interesting role choices.

From her self-described “frat bro” Shelby in “Neighbors 2: Sorority Rising” to the title role in the live-action retelling of “The Little Mermaid,” the 5-year-old child actress who cried on cue in “The Amityville Horror” is all grown up.

Chloë’s choice of boyfriend is attracting media attention, as well—Brooklyn Beckham, 17, the eldest child of David and Victoria Beckham.

The Atlanta, Georgia, native seems to be one of the former child actors who have managed to have a good head on their shoulders. We first met Chloë when she cinched one of her big breaks, landing the Isabelle role in Martin Scorsese’s 2011 multiple Oscar winner, “Hugo.”

Chloë described her part in director Nicholas Stoller’s “Neighbors 2,” which also stars Zac Efron and Rose Byrne, as a stereotype-breaking sorority girl. Chloe will be seen next in “November Criminals,” Sacha Gervasi’s adaptation of the novel of the same name, and “Brain on Fire,” Gerard Barrett’s film version of New York Post writer Susannah Cahalan’s memoir.

Excerpts from out chat with Chloë at the Universal Studios back lot:

Is dating another celebrity extra challenging?

Dating as a celebrity is one of the strangest things in the world. It’s no one’s business. I don’t care who my friends are dating unless the people who are dating them are being aggressive toward them and if they’re hurting them, then I care.

I’m not incredibly open, either. I just live my life day by day. What I don’t like is when media start to manipulate things and make them into something they’re not, because that is scary. When two celebrities date each other, it definitely ups it. It makes it a lot crazier. There’s a lot more pictures, a lot more of all that stuff. But, honestly, it just makes you more private (laughs)—which is fine.

How have you stayed grounded and avoided the pitfalls of being a former child star?

No one’s perfect. We all admit that. The more I come into my own as an adult, the more I see the mistakes and how people can go down certain roads, because you’re faced with opportunities. And all of a sudden, when you turn 18, you don’t think it’s going to be a big issue, but there are all these doors that open for you.

Some are scary doors and some are amazing doors, like being a part of the Hillary Clinton campaign, to be politically motivated and talk to young women as more of an adult figure.

You have other sides where you can have all the money in the world, go to any club you want, make anything happen, anyone can be your friend.  You’re a celebrity, and there’s all this stuff happening at once. It’s hard to say no, because both are so appetizing. I could go down that path.

It’s easy—partying and going out and all that stuff, the pictures and paparazzi. But what grounds me and makes me not make those decisions is my career, because I get so caught up in going to press tours and going to different countries and promoting my movies.

But when I find myself on set again and in front of the camera, it always comes back down to the same reason why I fell in love with acting when I was 6 years old. That’s what stops me from going there. It’s truly the love for the craft and the passion of it. Nothing is worth losing that. No substance, no money, no fame.

Speaking of “Neighbors,” you have brand-new neighbors. You just bought a house.

I had the opportunity to buy a home for me and my family. I like having solidity. A lot of things happened when I was younger, when I didn’t have a lot of solidity in terms of where my mom and I lived. My mom was a single parent. It was very difficult for a long time.

When I turned 19, I had the opportunity to care for my family and myself, and to make a decision as an adult. It was a big, proud moment. The house is great. Money doesn’t matter. None of that matters. I’m just happy that I have a place I can call home and not be moving every two years, because that’s been the life we had.

Did you start decorating yet?

Yeah, my mom is an interior designer, so I let her do it. I just go, “Do whatever you want. You can decorate it. I trust you. You have great taste (laughs).”

What’s your favorite room in the house?

My bedroom (laughs). No, the screening room. We’re having a little screening area. It’s just like couches and a projector. I’m obsessed with movies and filmmaking, obviously. So, I’ll be living pretty much in that screening room the whole time I’m in the house.

Can you talk about “The Little Mermaid?”

It’s just an awesome opportunity for any young woman to take on a brilliant Hans Christian Andersen story. Everyone loves a classic tale of a princess. In modern times, as a strong young woman, it’s cool to be able to reinvent things and show a different perspective.

That’s what I want to do. I want to flip it on its head a little bit and make it more naturalistic. Keep the same sentiments that we know and love about her, but make her more modern, emotionally.

You talked about being 19 several times. At this stage, have you found yourself?

I haven’t found myself, for sure. I’m all over the place—I think everyone is. I’m 19, and I will say that making movies, being an actor and having that creative outlet have really helped me. I’ve said this a hundred times, that without acting in my life, I don’t know who I’d be. I put so much into that and so many of my emotions and things I’ve dealt with in my life have gone to that.

I question myself every day. There are many things happening around me, and I’m faced with all these opportunities. Every day is a battle of choices to make the right decision.

I’m politically active, so I’m trying to do that. There’s a lot of stuff happening. I’m just trying to take it all in and remind myself to slow down a little bit. I don’t need to rush too much, because I put a lot of pressure on myself to be the best of everything I could possibly be.

I’m incredibly competitive with myself. No one puts that on me. I remind myself that I’m 19 and I’ve already made a lot of headway. I just need to take a second to breathe.