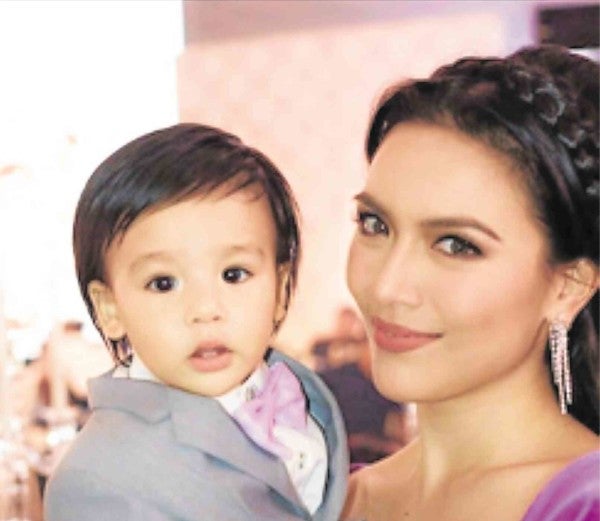 “It’s my mom’s birthday the day before, so we plan to have a ‘staycation’ in one of the hotels here,” she relates. “On the day itself (May 8), we will have a lunch get-together.”

Ciara says the Sottos have always been clannish and tight-knit. That’s why she doesn’t really feel like a solo parent to her one-year-old son Crixus even though she’s separated from her husband, film executive Jojo Oconer.

“I moved back to my parents’ house,” she explains. “It’s very convenient for me. My mom is always there to help me out. Also, my eldest sister Apple and her two boys live with us. My son is growing up in a loving environment. He’s surrounded by relatives—his grandparents, aunts and uncle, and cousins.”

Make that eight cousins and counting, because her brother Gian’s wife is pregnant again. They’re always having a ball at home, she relates.

She shares the story behind her son’s unique name. “He is named after a gladiator in the TV show, ‘Spartacus.’ I used to watch that series with his father.”

Although it was initially tough, she insists that she’s coping well now.

She concedes that husband-wife relationships are complex. “We all have our own issues,” she quips. “I am not saying that I’m perfect, but I wanted to fight for my rights.”

She clarifies that she is currently on good terms with her estranged husband, though. “Crixus gets to spend time with his dad, too. It’s important for my son to have his father in his life,” she says.

Of course, her father, Sen. Tito Sotto, would gladly act as proxy dad anytime. “My son calls him ‘Dada,’ because he can’t pronounce ‘Tatay.’ He calls my mom ‘Mimi’—short for ‘Mamita.’”

She recalls that she remained active when she was heavy with Crixus. “Actually, I didn’t know I was pregnant then, and yet I played a battered girlfriend in the Cinemalaya film, ‘Hari ng Tondo.’ I also did aerial silk [stunts] in the TV5 show, ‘Celebrity Dance Battle.’”

She admits that she’s now hesitant to go back to her old fitness routine of pole dancing and aerial silk.

She says that she and her son are virtually inseparable these days. “I can’t bear being away from him. It’s like my version of postpartum depression. Even when I have taping (for “Princess in the Palace”), I bring him with me. It’s also because I am still breast-feeding him.”

She extols the benefits of breast-feeding. She has a simple wish for her son. “I hope he will grow up into a good boy, student and citizen of the country. I wish we’ll have an ideal mother-son relationship.”

She recently recorded one of her dad’s old compositions, “Pag-ibig Ko’y Ibang-Iba,” released by Viva Records. “It came with a music video,” she reports. “It’s now on YouTube and consists of lots of photos of me and my son.”