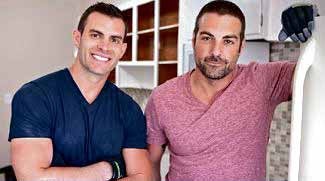 ACCORDING to the cousins, “Many people don’t really know what they want, but everybody knows what they don’t want.”

Anthony Carrino and John Colaneri, also known as reality TV’s handy, hunky cousins, have been chasing kitchen owners’ blues away since 2011 via “Kitchen Cousins,” “Cousins Undercover” and “Cousins On Call.”

Season One commences its eight-episode telecast today, April 26, at 9 p.m. on HGTV (channel 88 on Destiny and SkyCable).

“You’ll hear a lot of laughter in the  show,” John told the Inquirer when we met him and his cousin for this quick chat at Discovery Primea on April 18. “This time around, however, you’ll also be seeing more exciting design innovations.”

But while their desperate clients are truly in dire need of a major kitchen overhaul, Anthony said that, unlike most reality programs, their show neither thrives on drama nor banks on its participants’ anxiety and overblown emotions.

He explained, “There’s so much negativity on TV these days, and we want no part of that. You don’t see us fighting because that isn’t who we are. We believe that showing positivity would be much more beneficial to viewers.”

Growing up, did they enjoy breaking things and building them up again from scratch? “Yes, we enjoyed recreating [broken things]. That was why it made sense when, in 2010, a friend of ours thought that it’d be great to see us on TV. She knew how passionate we were about construction and design.

“One day, she filmed a short piece of  us in action and mailed the video to HGTV. We didn’t hear anything for about a year, then the network called us to do a pilot and loved our test episode. Now, viewers get to see the rest of what happened thereafter.”

What is most fulfilling about being on the hunt for “desperate kitchens”? John answered, “For the new show, we travel all over the United States, so viewers are made aware of how different the houses are—from the East Coast and down south, to the Midwest and the West Coast. We’re taking viewers everywhere.

“The architecture changes as you go from one place to the next, and the homeowners’ needs and styles vary.”

Excerpts from our Q&A with Anthony and John:

What design would you suggest to a couple who’s building a new home in a two-season country like the Philippines?

Anthony (A): It’s difficult to give specific design advice without seeing someone’s home and a specific layout.  Couples need to constantly communicate with each other. Each of them needs to have inputs so that the house they live in becomes a home that they create together.

You need to have a plan. Don’t get excited; don’t start renovating prematurely if you don’t want to spend a lot more time and money than necessary. Stick to the plan, then build.

John (J): It’s also crucial to point out that a specific design is unique to every home.

What if you don’t like the design that the client has in mind?

A: We do the design, just the same—but they don’t get to see how we execute it. We operate on the idea that many people don’t really know what they want, but everybody knows what they don’t want. So, we listen to all their dislikes and create a palette of what they do like.

J: Truth is, we’ve never had one person not like what we did. We’ve always exceeded our clients’ expectations. The fact that we do these projects in just three days is the crazy part.

We’ve seen your crossover episode with “Ellen.” How did you finish those projects in three to six days? How big is your team?

J:  For “America’s Most Desperate Kitchens,” it’s a small team—about eight to 10 people. It’s about being efficient.

But we plan everything ahead; we have all the materials there. We make sure that every hour is used productively.

A: We’re meticulous. What makes it  hard is the fact that we travel a lot, so we always work with different teams. For people who aren’t used to our speed, we give a pep talk at the beginning of each episode so they know what to expect.

We don’t have time to look at the space first, so we get initial information about the place by way of pictures, videos and architectural drawings. We design from a distance, which is a challenge in itself.

The TV industry and the construction business don’t always go together, so we have to figure out a way to do things efficiently, because what we do requires a lot of preparation.

Who always gets his way when you don’t agree about something?

A: The best plan wins. We trust each other’s judgment. Whether you’re a married couple or business partners, you’ve got to have respect for each other and learn how to compromise. The difference for us is that we’re compromising for the betterment of our clients.

J: He’s lying. When he doesn’t like my design, I punch him (laughs). Seriously, when something like that happens, you talk about it and figure out a solution.

Do you have a favorite episode?

A: For Ellen DeGeneres’ show, there was a couple whose house was flooded to five feet. They lost everything, so we rebuilt their home in five days! Every other house in that neighborhood was wiped out.

In Jersey City, where I live, I was without power for 10 days. So, we’re starting to see what you guys here in the Philippines have to frequently deal with.

Are you now comfortable with having more and more people know who you are?

J: At least the public knows us for the right reasons (laughs). I like being known for doing good things and helping others.

A: Some reality stars play it up for the drama. If you’re rude on TV, people are going to be rude to you because they think that’s what you are.