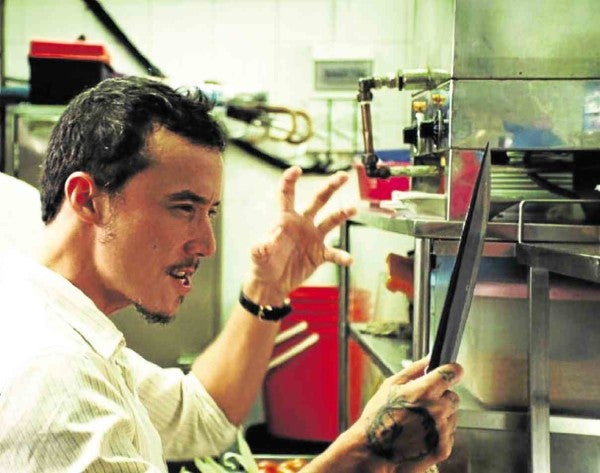 After a series of overhyped but ultimately underwhelming movies (Lemuel Lorca’s “Echorsis,” Adolf Alix Jr.’s “Whistleblower”) comes “Unlucky Plaza,” an OFW-themed ensemble drama that is as significant for its narrative pertinence as it is for its director’s ability to engrossingly spin interconnected tales. Ironically, Ken Kwek, its director, isn’t even Pinoy—he’s Singaporean.

Kwek provides an affectionate insight into the indomitable spirit of OFWs like his film’s protagonist, Onassis Hernandez (Epy Quizon, in a career-best portrayal), a cash-strapped single father who’s having a hard time keeping his Pinoy food stall afloat.

Ona’s small restaurant at the Lucky Plaza mall, a favorite hangout of Filipino expats on Orchard Road in Singapore, is in dire financial straits. But, things begin to look up for the beleaguered restaurateur when he meets well-meaning Michelle (Judee Tan), who has problems of her own:

Michelle wants to leave her debt-ridden husband, the hypocritical Terence aka Sky Chia (Adrian Pang), and start anew with her feckless boyfriend, Tong Wen (Shane Mardjuki)—who just happens to be her Christian pastor!

Their convoluted situation takes a turn for the worst when the gun-wielding hatchet man (Guo Liang) of a Chinese gangster comes knocking on Sky’s door—and Onassis, who’s handy with a meat cleaver, finds himself on the verge of losing custody of his Singapore-born son, Popoy (Christian Wong)!

The film isn’t perfect. But, even as it takes too much time playing out its meandering hostage scenes and its loose ends-tying epilogue, Kwek’s briskly paced production quickly overcomes its occasional incoherence by providing a mordantly funny view of the unpleasant side of the Filipino diaspora.

What makes Epy’s award-winning performance even more vital is his decision to do away with excessive schmaltz and show-stopping histrionics.

The actor turns in an affecting portrayal delivered with the chilling plausibility of an Everyman on the wrong end of a devastating situation.

Epy’s coactors also deliver fine performances, but his characterization establishes the balance needed to provide focus for a movie with a multicultural milieu.

The glaring and biting cultural contrasts the film depicts are spot-on—and are never derogatory!