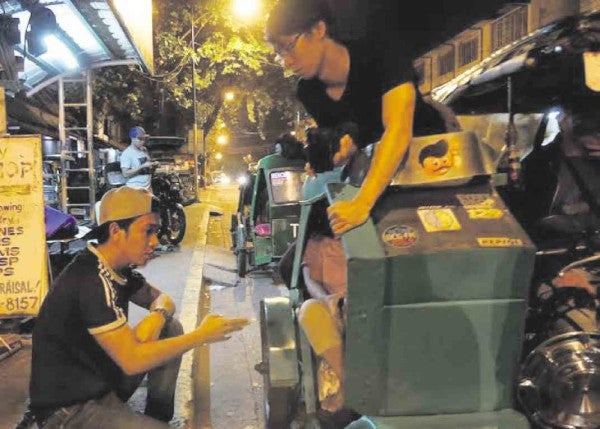 Barely two years ago, Raymund Ribay Gutierrez, unhappy with his dead-end job in an advertising firm, quit, followed his passion and enrolled in a film workshop under Cannes-winning director Brillante Ma. Mendoza.

In that workshop, he won best director for the short film, “Anggulo.”

“His aesthetics was different and he stood out among his batchmates,” Mendoza recalled.

Fast-forward to the summer of 2016, Gutierrez, with his film, “Imago,” is vying for top honors in the Short Film Competition of the Cannes fest (May 11 to 22 in France), while his mentor Mendoza is again part of the Main Competition with the full-length feature, “Ma’ Rosa.”

“Imago” was a product of one of Gutierrez’s many conversations with his mentor. “Direk Brillante mentioned an unusual job he had encountered before,” Gutierrez recalled. “I got curious and did some research.”

In writing the script, Gutierrez, a graduate of the Mapua Institute of Technology, “immersed” himself in the world of funeral agents. “I wanted to tackle not just their profession, but their life and perspectives on life.”

The shoot for “Imago” turned out to be one of the most challenging experiences in the 23-year-old filmmaker’s life.

“It was exhausting,” he recounted. “We would shoot from dawn to the morning of the following day. But at the same time, it was fun because I got to work with friends.”

The 15-minute film took all of six days to shoot. “I decided to revise the script during filming, because the main idea wasn’t working,” he related. “So we had to reshoot. We had limited resources, so every minute counted.

He filmed in different hospitals in Manila, Mandaluyong and Marikina. “Those places were always crowded. I only had a small crew, so they had to perform two roles most of the time.”

He combined professional actors (led by Mendoza regular, Ruby Ruiz) and non-pros on the set. “It was tricky … convincing the pros not to act, while motivating the nonpros to act—so they would meet halfway.”

Now, that his short film is Cannes-bound, Gutierrez is optimistic and pragmatic at the same time.

“As a young filmmaker, it would give me more opportunities to increase my knowledge about cinema,” he explained. “I know I did my best, but I don’t want to expect anything because it’s my first ‘serious’ film.”

Last year, he also attended Cannes, for the premiere of Mendoza’s “Taklub” in the Un Certain Regard section.

Gutierrez also looks up to scriptwriter-director Armando “Bing” Lao, who in turn is Mendoza’s mentor. “They are two of the biggest influences in my career. They gave me the words that allowed me to express what was in my mind.”

From the 2014 workshop, and from his daily dealings with Mendoza, Gutierrez has certainly picked up numerous insights. “He made me realize that ‘perfection’ does not exist. Spending too much time on irrelevant details only leads to failure and depression. We should focus on things that truly matter. Lastly, you must be honest to yourself in order to make good films,” Gutierrez asserted.

Is he already making plans, post-Cannes?

“I just want to screen my film in different theaters all over the world,” he quipped.