NEW YORK— The reengineered “Pirates of the Caribbean” sequel “On Stranger Tides” found its smoothest sailing overseas, where it took in a record $256.3 million at the international box office, according to studio estimates Sunday. 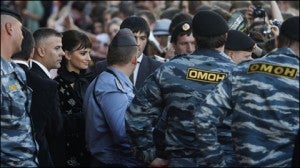 Actress Penelope Cruz is surrounded by Russian police officers as she signs authographs before the Russian premiere of Walt Disney title "Pirates of the Caribbean: On Stranger Tides", in Moscow. Russia. (AP Photo/Ivan Sekretarev)

It was a risky reboot considering the popularity of the previous “Pirates” films. The last, 2007’s “At World’s End,” opened with $114.7 million.

But “At World’s End” was also badly reviewed and disappointing to much of its audience. For Disney, which has expansive merchandising and theme park tie-ins to “Pirates of the Caribbean,” it’s a crucial franchise. The first three movies earned a combined $2.7 billion worldwide.

“The whole play of this particular movie was based on a worldwide release because of our feeling of how strong the international marketplace would be,” said Chuck Viane, head of distribution at Disney. “Johnny is not just a domestic star. Johnny is an international star.”

Viane said the result vindicated the franchise’s new look, that audiences “loved the rebooted attitude.” Viane didn’t comment on whether this meant a subsequent fifth film, but that seems extremely likely. Producer Jerry Bruckheimer already has a script in the works.

“On Stranger Tides” was the only new film in wide-release on the weekend. In its second week of release, the acclaimed comedy “Bridesmaids,” starring Kristen Wiig, was second at the box office with $21 million. That was an impressively small decrease of just 20 percent from the Universal release’s opening weekend of $26.2 million.

The slight decrease was even less than popular comedies like “The Hangover” and “Wedding Crashers,” which had similarly sustained business due to strong word-of-mouth.

Last week’s top film at the box office, the comic book adaptation “Thor,” from Paramount, slid to third place in its third week of release. It earned $15.5 million, bringing its cumulative total to $145.4 million.

Making its limited-release debut was Woody Allen’s “Midnight in Paris,” which has received some of the best reviews for Allen in years. The Sony Pictures Classics release opened in just six theaters, but drew an exceptional per-screen average of more than $96,000.

Though “On Stranger Tides” had the best North America opening of the year, the international revenue was the larger story. The film traded on its foreign appeal by casting international stars like Cruz and setting itself in bright tropical locales.

“This proves the importance of the global marketplace,” said Paul Dergarabedian, box office analyst for Hollywood.com.

The film performed especially strong in Russia, China and India, accounting for $52.6 million. It set an all-time record in Russia, taking in $28.6 million.

The film benefited from higher ticket prices for 3-D showings, but perhaps more importantly from IMAX screenings. “On Stranger Tides” set a global record for IMAX with $16.7 million worldwide.

Propelled largely by the “Pirates” installment and the continuing success of “Bridesmaids,” it was the second “up” weekend in a row as compared with box office figures from the same weekend last year. Next weekend, the three-day Memorial Day weekend, also appears bright, with debuts from “The Hangover Part II” from Warner Bros. and “Kung Fu Panda 2” from Paramount.

Combined with the second weekend of “On Stranger Tides,” Dergarabedian expects it to be one of the biggest moviegoing Memorial Day weekends ever.

Estimated ticket sales for Friday through Sunday at U.S. and Canadian theaters, according to Hollywood.com. Final figures will be released Monday.