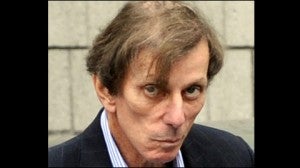 NEW YORK — Joseph Brooks, the Academy Award-winning songwriter of “You Light Up My Life” who was awaiting trial for rape, was found dead Sunday of an apparent suicide in his Manhattan apartment, police said.

Brooks, 73, was discovered in his Upper East Side apartment around 12:30 p.m. by a friend with whom he had planned to have lunch, police spokesman Paul Browne said.

Brooks was found with a plastic dry-cleaning bag around his head and a towel wrapped around his neck, Browne said. A hose attached to a helium tank was hooked up to the bag, he said. It was not immediately clear how long Brooks had been there.

The medical examiner will perform an autopsy to determine the cause of death. Police said a suicide note was found but they didn’t reveal its contents.

Brooks was awaiting trial on allegations that he molested women who were lured to his apartment for supposed acting auditions. He pleaded not guilty to rape and other charges.

Brooks won the Academy Award for best original song for the 1977 Debby Boone ballad “You Light Up My Life” and directed a related movie. He also won a Grammy for the song.

He pleaded not guilty in 2009 to rape, sexual abuse and other charges in the attacks on 13 women. His trial date had not been set.

Prosecutors say he lured most of the women to his apartment through an online ad offering auditions for a movie role, then sexually assaulted them after making them drink apparently drugged wine as part of an “acting exercise.”

Brooks’ son, Nicholas, has also been charged in a high-profile criminal case in New York.

Nicholas Brooks is charged with murder in the death of his girlfriend, Peruvian-American swimsuit designer Sylvie Cachay, who was found dead in an overflowing bathtub at the swank Soho House club and hotel in December. He has pleaded not guilty.