Andrea Bocelli to perform in Manila 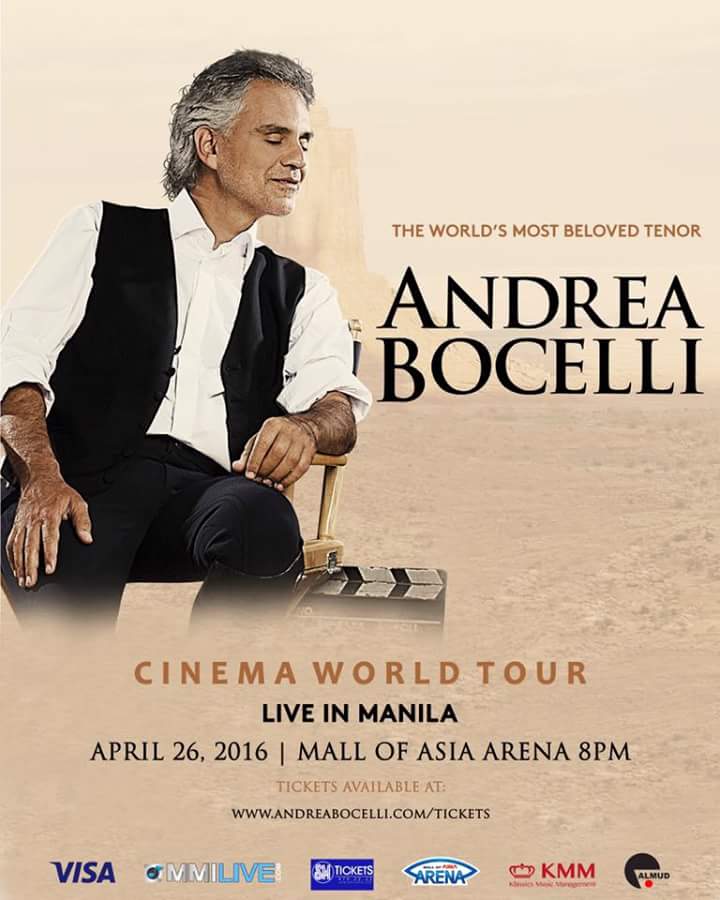 One of the most–anticipated live performances in the country this year, the world’s most beloved tenor, Maestro Andrea Bocelli is set to hold his “Cinema World Tour” concert at the Mall of Asia Arena on April 26, 2016 presented by Music Management International (MMI Live).

Among the many highlights of the classy and elegant evening, the concert’s first half is dedicated on featuring arias and duets from the world most famous operas featuring soprano Maria Katzarava and flautist Maestro Andrea Griminelli.

Maestro Bocelli will also be accompanied by one of the country’s most renowned ensembles, the ABS-CBN Philharmonic Orchestra with the Ateneo Chamber Singers– bringing the event together in spectacular fashion.

The second half, however, is dedicated to the Maestro Bocelli’s popular repertoire and select songs from the album “Cinema,” with a special guest performer –the equally talented and beautiful Christine Allado — an emerging musical talent with a voice that fuses her Classical Soprano roots with a contemporary spin of Pop and Jazz.

Christine Allado is an all-around performer and actress who has appeared on stages and broadcasts all over Asia, and currently in London’s West End.

“Cinema” marks Bocelli’s first new studio recording in two years which features a collection of movie songs etched in the culture and hearts of several generations including epic theme songs featured in films such as “Doctor Zhivago”, “Love Story”,  “The Godfather”, “Life is Beautiful”, “Il Postino”, “Breakfast at Tiffany’s”, and many more, as well as popular songs from stage musicals, immortalized by their film versions, such as “West Side Story” and “Evita.” As a special bonus, there’s a brand new song fashioned from the popular “Gladiator” score.

With over 80 million albums sold worldwide, this international star who has been honoured with star on the Hollywood Walk of Fame, whose Central Park concert in 2011 entered the history of music as one of the greatest live performances of all time, and who has had the honour of performing live in front of three Presidents of the United States, three popes, and royal families all over the world.

Visit #MMILive for more details. For ticket information, log on to smtickets.com/andreabocelli.com or call (02) 470-2222.