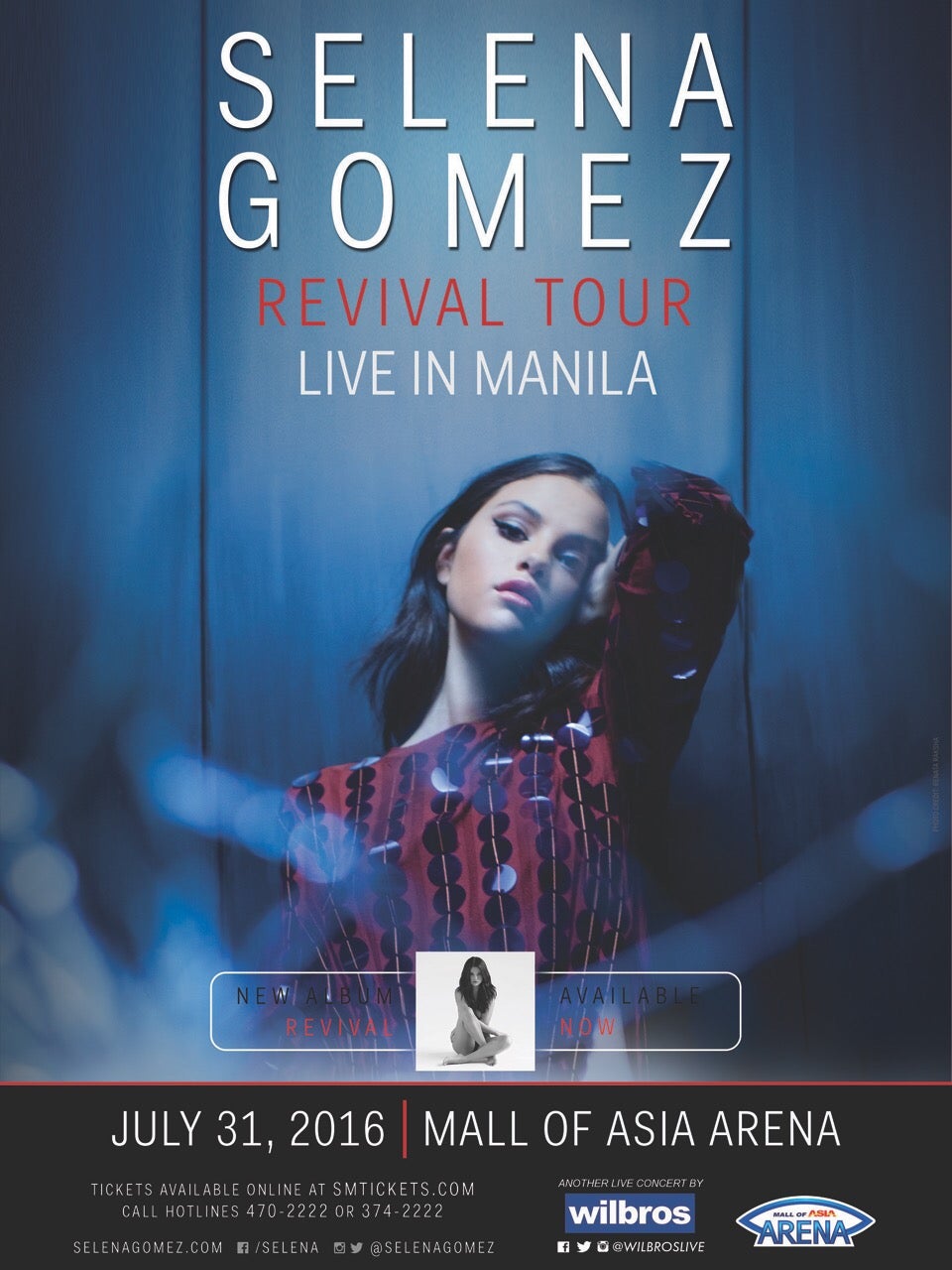 The long wait is over! Global pop sensation Selena Gomez is finally coming to Manila and will be bringing her much-awaited The Revival Tour on July 31, 2016 at the Mall of Asia Arena.
Selena Gomez made her mark in entertainment by conquering film, music and television at an early age. On the big screen, she began making the transition from young actress to adulthood with such films as the much talked about Harmony Korine’s “Spring Breakers.” The film premiered at the Venice Film Festival to critical acclaim while Gomez’s performance was singled out as a “breakout.” She was most recently seen in the Academy Award nominated film “The Big Short” opposite Brad Pitt and Ryan Gosling.   “Fundamentals of Caring” alongside Paul Rudd premiered at the 2016 Sundance Film Festival. Gomez was named by Vulture.com as one of “The 20 Best Performances of Sundance 2016.“ She will next be seen in Seth Rogen’s “Neighbors 2” and later this year in the James Franco directed “In Dubious Battle.”
As a recording artist Selena has sold over 45 million tracks worldwide.  Gomez’s recently released her critically acclaimed album “Revival.” The first two singles off the album “Good For You” and “Same Old Love” went to number one on the US Top 40 chart. “Hands To Myself”, her third single of the album, is now in the Top 10 charts worldwide. In May, she will hit the stage and embark on her highly anticipated global “Revival Tour.”
Gomez has added executive producer to her impressive list of credits. Academy Award winner Tom McCarthy will join Gomez as executive producers of the Netflix original series “!3 Reasons Why.”
Giving back has always been an important element in her life.  She was named the youngest goodwill Ambassador for UNICEF at 18 years old and has worked tirelessly to support this organization ever since. Selena was honored for her continued support at Variety’s first ever Unite4: Humanity event with the Young Humanitarian Award alongside Bill Clinton. Gomez has traveled to Ghana, Chile and most recently to Nepal as an advocate for some of the world’s most vulnerable children. She has hosted “We Day” in both Vancouver and Chicago for Free The Children, an organization that empowers young people to achieve their fullest potential as agents of change by being active local and global citizens.
Tickets to Selena Gomez’s The Revival Tour in Manila will be on-sale by Saturday, April 16 via SMTickets.com or Call 470-2222 or 374-2222. Presented by Wilbros Live.
ADVERTISEMENT
FEATURED STORIES
ENTERTAINMENT
WATCH: Jane De Leon releases own ‘How You Like That’ dance cover
ENTERTAINMENT
K Brosas silences basher by reporting them to their employer
ENTERTAINMENT
Allan K draws flak for comment on suicide
Read Next
Beyonce launches active wear line for women
EDITORS' PICK
A gem of a residence in the new normal
PNP: Checkpoints back in MECQ areas
Water remains our saving grace right now
Been there, done that but what’s the difference between MECQ and GCQ?
BREAKING: 3,226 latest COVID-19 cases bring PH’s total to 106,330
Smart 5G goes live
MOST READ
MECQ guidelines in infographics
Citing Duterte order, Lorenzana says PH won’t join other navies in South China Sea drills
MECQ in NCR, other areas: Mass transportation suspended, quarantine pass required anew
Want higher pay? Join the police force, Duterte tells nurses
Don't miss out on the latest news and information.