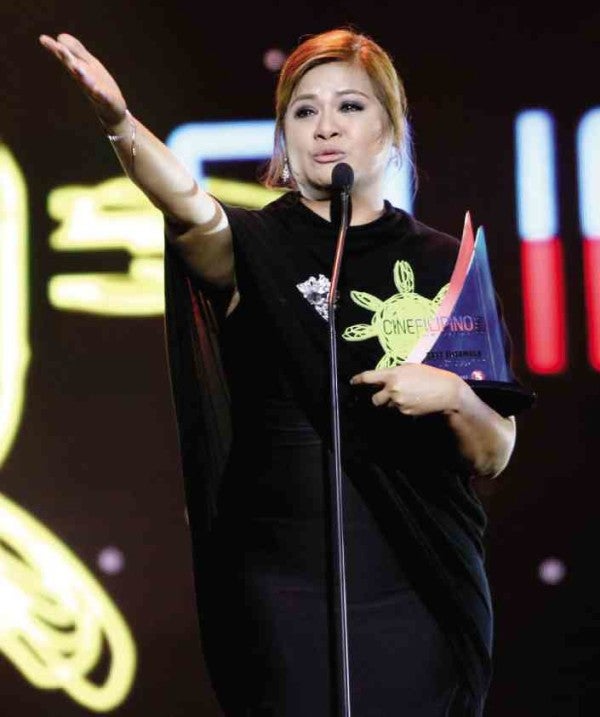 WHEN filmmaker Randolph Longjas first discussed the film, “Star na si Van Damme Stallone,” with actress Candy Pangilinan, he promised her that it was just a light “dramedy” flick about a mother’s love for her child, who has Down syndrome.

As the shoot progressed, however, Candy quickly realized that the film was quite an acting challenge.

“I got surprised,” she recalled. “In one scene, Direk told me that I had no lines, but all sorts of emotions were going through my mind.”

She just had to ask her director: “Is this the way things are in an indie film?” She has never played a full-length role in an indie movie prior to this CineFilipino entry, she explained.

Doing “Van Damme” yielded a Eureka moment for her: “In indie films, people don’t talk, but they do a lot of thinking… that’s more tiring ha!”

Candy, who is more known as a comedienne in the entertainment industry, quipped: “I had to remember all those acting theories I learned in UP Diliman!” She finished Theater Arts in college.

Her gambit paid off big time, when she tied for best actress with Angeli Bayani (who won for “Ned’s Project”) at the CineFilipino Film Festival.

It was Pangilinan’s first acting trophy for a movie or TV show. “I never thought that a comedienne like me could win for a dramatic role.”

The script hit close to home for Candy, whose 12-year-old son Quentin has autism. “I can relate with my character,” she owned up. “I know the child’s weaknesses… the parent’s frustrations and joys.”

No, the role was not written for her, she pointed out. “It was just coincidental. My friend Melvin Lee, who is Direk  Randolph’s mentor, recommended me because he knew about my son.”

The neophyte director was confident from the get-go that Candy would know how to interact with the film’s three young actors—Paolo Pingol, Jad Dilanco and Mattea Curativo—who all have Down syndrome and played Van Damme at different ages (Paolo, 24, as a young adult; Jad, 8, as a child; and Mattea, 5 months old, as a baby).

Related the director: “I couldn’t have survived the shoot without Candy. Because of her real-life experiences, she knew how to handle our actors (who have Down syndrome). She has genuine love and patience for the kids, making her perfect for the part.”

A crucial scene involved Paolo, who had difficulty buttoning his shirt. “I noticed that he was getting upset. So, I gently encouraged him. When he was able to do one button, he looked at me, beaming with pride. Then, he was able to do all the buttons. I cried!”

When she looked around her, everyone on the set was also in tears.

It was a learning experience, in more ways than one.

“As an actress, I realized that I can do a serious role  pala. As a woman and as a mom, my views on life became more expansive,” she said.