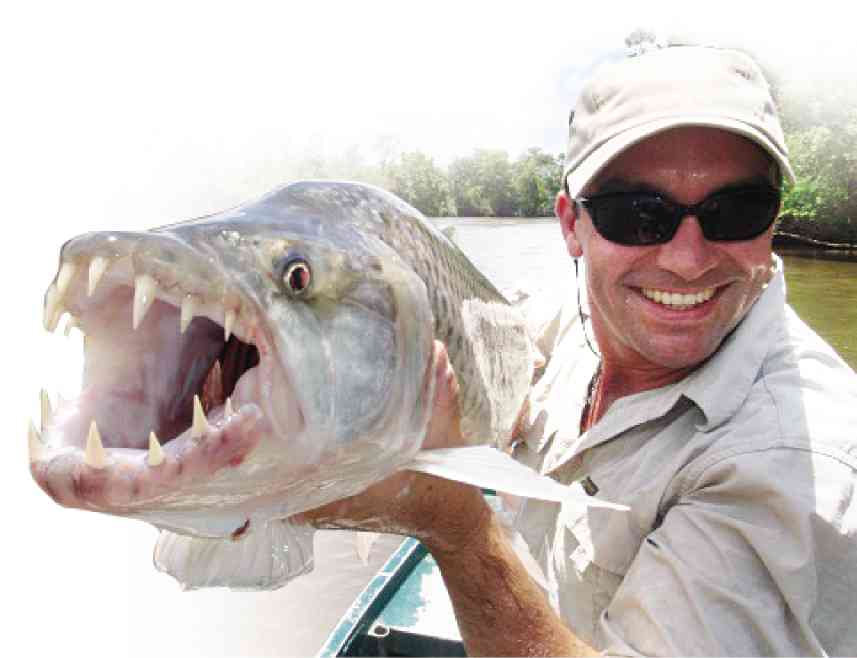 “The show mixes elements of adventure, thrill and danger, while dealing with big fish,” Chauquet told the Inquirer in a phone interview during a break from filming in a Costa Rican jungle for the History series, “Chasing Monsters” (Thursdays starting March 24, 10 p.m.).

“All of it is [captured] in fast-paced editing, so the show is pretty entertaining—never a dull moment, even if fishing is slow, sometimes. Everybody can watch the show and have fun,” he enthused.

The host and fishing expert created the show about 10 years ago. He clarified that the titular monsters are mostly fish that are “dangerous, big or difficult to get.” Episodes this season show his encounters with, among other fascinating creatures, sharks, giant catfish and alligators.

“The planet is full of monsters—and I have a pretty good knowledge of where to find them. I also have a lot of friends involved in the sport fishing industry,” he said. “We talk, and I have a team of researchers that work on the show.”

Chauquet, who took up business administration, said that he isn’t attracted to danger, per se. He explained that it naturally comes with the territory: “It’s not so much the appeal of danger—my motivation in catching really large fish is, [it’s] really thrilling… everything can go wrong, your equipment can break or you can lose the fish. It’s a big challenge—[it’s] not that I want to put myself in danger on purpose. It’s more about the chase and the challenge of being able to catch that big animal!”

However, hosting “Chasing Monsters” isn’t always smooth-sailing, according to the seasoned traveler. “I have gotten injured,” he said. “Not by the animals themselves—I got really lucky over the years—but I have fallen while trekking forests and gotten sick from eating [bad] food. Sometimes, we get airlifted from the middle of nowhere.”

Fans of the show, Chauquet added, can be categorized into distinct groups: “Hardcore fans like fishing—and they want big and small fish caught. We also reach out to people who have an interest in seeing a guy getting himself into crazy adventures to get the fish. I get compliments from people who have never fished before and say, ‘Wow, it looks cool—I want to try it!’”

So what happens to those “monsters” after they’re caught? “Most of the creatures we capture get released, 99 percent,” he revealed. “Monster fish have to be respected, but sometimes, we eat fish. And I’m the first to eat a good one every now and then. I like eating fish!”

Read Next
Get ready for the 8-hour challenge
EDITORS' PICK
Acer starts the year off strong with the Aspire Vero National Geographic Edition
Gear up and get ready to play with Yamaha Mio Gear
Over 3 Million worth of prizes to be won at Smart Padala’s SENDali Manalo Promo!
Metro Manila posts lowest temperature yet this ‘amihan’ season at 19°C
DOH: 28,471 new COVID-19 cases in PH; active cases now 284,458
On Day 2 of implementation, gov’t says workers now exempt from ‘no vax, no ride’ policy
MOST READ
Cold-case investigation names surprise suspect in Anne Frank’s betrayal
Emma Stone calls Andrew Garfield a ‘jerk’ after he ‘lied’ about his ‘Spider-Man: No Way Home’ appearance
Derek Ramsay on being married to Ellen Adarna: ‘Gumaan ‘yung mundo ko’
Czech anti-vax singer dies after deliberate infection
Don't miss out on the latest news and information.