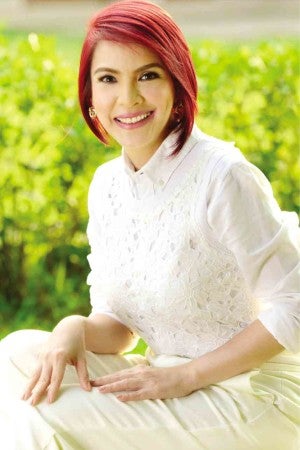 Unlike other performers, Jamie Rivera, who is primarily known for recording religious songs, doesn’t usually take a break during Holy Week. “I’m usually very active during Lent,” she told the Inquirer.

This year, there are invitations to perform and give testimonials in a few church-based activities. “I will also be part of the Radio Veritas anniversary on Easter Sunday.”

Since her calendar is already fully booked, she squeezed in a little R ’n’ R when she visited Davao for a recent gig. “So I could say that I got to go to the beach this summer.”

Jamie’s strong work ethic was honed when she played Kim in the West End production of “Miss Saigon” 25 years ago.

She posted an old photo from “Miss Saigon” on her Facebook page, to encourage the hopeful aspirants who auditioned for the megamusical, which conducted tryouts in Manila recently. “My advice to them is to give their best, take care of their voices and have fun,” she said. “You will surely learn a lot there.”

She recalled that one has to be in tip-top shape, doing eight shows a week. “We couldn’t afford to get sick and be absent.”

It’s not all work, she said. “Enjoy yourself and the family you will form with your fellow actors.”

She said that she made life-long friends in “Saigon”—from Isay Alvarez to Robert Seña, from Pinky Amador to Jenine Desiderio. “Nothing has changed. We will always support and love each other,” she said.

She applies the same discipline and constant desire for knowledge to her present show biz career. She can discuss the intricacies of different music platforms, from Spotify to iTunes, with the authority of an expert.

“I have to know these things,” she quipped. “This is my focus now.”

Although she still takes the traditional route (her CD, “We Are All God’s Children,” topped the chart during the visit of Pope Francis last year), she knows only too well that “downloading” is the new frontier for musicmakers.

Jamie made sure that her newest single, “Pag-Isipan Mo ang Boto Mo,” which is Star Music’s official theme song for this year’s election, is readily available on Spotify, as well as in sites like ABS-CBN Store, iTunes, Mymusicstore.com.ph, Amazon.com, Onemusic.ph and Starmusic.ph. 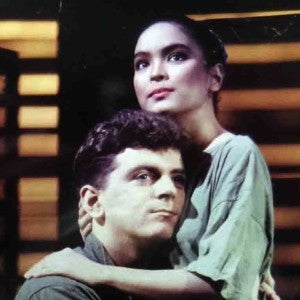 AS KIM in “Miss Saigon,” with Glyn Kerslake as Chris

She is amazed that singers need not churn out an entire album, that one song can be made available on diverse platforms. “It’s like going back to the days of 45-rpm singles. It reminds me of my first record, ‘Hey, It’s Me.’”

She takes a proactive stance—not only when it comes to her music, but also when talk turns to national issues.

Jamie said that if she could have her way, she would give away “Pag-Isipan Mo ang Boto Mo” for free—to spread its message of critical thinking among voters, especially among the youth.

Jamie wants our countrymen to go beyond the personality-oriented nature of Philippine politics. “Some first-time voters are very intelligent, but most Filipinos regard politicians like artistas… celebrities,” she explained.  “It’s a superficial way of choosing leaders. We should look into the candidates’ platforms. We should think carefully, because our nation’s future is at stake.”

Jamie herself has yet to decide whom to vote for in the May polls. Suffice it to say, she prays that our people will elect someone who has only the good of the country in his or her heart.

“Someone who is not vengeful… someone who sees the good projects of past administrations and would continue them, but at the same time, someone who’s also aware of the bad things and would change them,” she asserted.