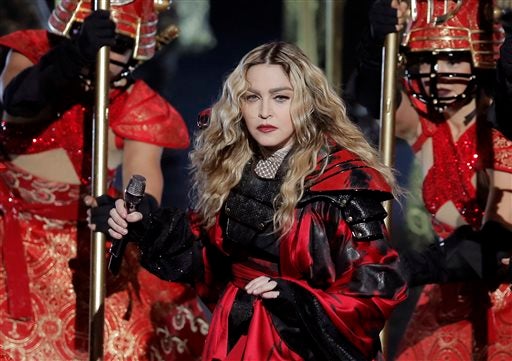 In this Feb. 20, 2016 file photo, U.S. singer Madonna performs during the Rebel Heart World Tour in Macau, China. Madonna has angered fans by starting a concert in the Australian city of Brisbane more than two hours late and finishing the show early Thursday morning, March 17 after the last train had left the venue. (AP Photo/Kin Cheung, File)

BRISBANE, Australia — Madonna has angered fans by starting a concert in the Australian city of Brisbane more than two hours late and finishing the show early Thursday morning after the last train had left the venue.

The pop star had been due to start at 9 p.m. local time but did not take the stage at the Brisbane Entertainment Center until 11:22 p.m.

Hundreds of angry fans had left the venue by then and demanded refunds at the ticket office after a public announcement that the “Rebel Heart” show would not start before 10:30 p.m.

During the concert, she thanked the crowd that was near the venue’s 13,500 capacity for their patience, but joked they had arrived too early.

“We started late — that hardly ever happens,” she said. “You were here too early. You should have taken your time doing your hair and makeup. Then I wouldn’t have been late.”

The last train left the entertainment center in the outer suburb of Boondall at 12: 15 a.m. — around an hour before the concert eventually ended. Long lines of concertgoers waited for taxis.

Madonna plays a second Brisbane concert on Thursday night before ending the tour in Sydney.