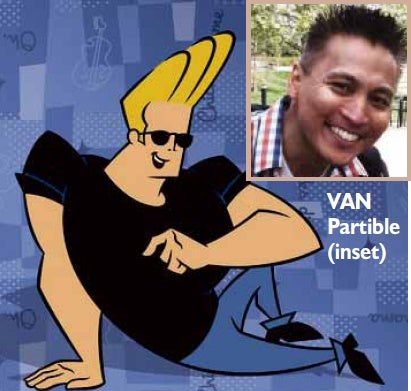 “I was brought up in a very Filipino family,” said Van Partible, creator of the hit animated series, “Johnny Bravo,” in an e-mail interview. “Like all Filipinos, I have an Uncle Boy and an Auntie Baby!”

The artist will be one of the featured guests in the two-day Fil-Toon Comic Con, on March 19 and 20 at Fontana Hot Spring and Leisure Water Park in Clarkfield, Pampanga.(Visit filtoon.com or ticketnet.com.ph)

Eventually, the series about a silly, buff guy who sounds like Elvis Presley, started airing on Cartoon Network in 1997. The show aired until 2004, and the character returned in a special, “Johnny Bravo Goes to Bollywood,” in 2011.

Partible, now in his 40s, has worked as a writer, producer and script editor for various cartoon projects. His family moved to the United States when he was a baby in the 1970s. He currently resides in Southern California. Excerpts from our interview:

How would you describe “Johnny Bravo’s” success?

The success of “Johnny Bravo” has been an unexpected surprise. I simply created a character who embodied everything that was funny to me.

What can participants of the cartoon convention expect?

Attendees can expect to hear me say, “Mabuhay!,” and hopefully get a personalized drawing from me! I’m honored to be a guest. It’ll be the first time to be back to the Philippines since I was 9 months old—which is why I don’t remember much!

How would you describe pursuing a career in animation in the US?

It’s a dream come true. It’s like working in a fun factory, where your main goal is to entertain people. What more could you ask for?

How much of the Filipino culture are you familiar with?

I know how to cook adobo and roll my own lumpia. There was a movie that came out in 2000, called “The Debut” (directed by Gene Cajayon), which was loosely inspired by my life as a Filipino immigrant trying to fit in America. That experience gave me a sense of pride in my culture.

So, when the fifth season of “Johnny Bravo” came around, I did my best to hire more Filipinos onto my staff—I got three artists. I was also able to bring in Lea Salonga, Tia Carrere and Dante Basco into the studio to voice characters on the show.

What advice do you give aspiring cartoonists and creators?

Cartoons have finally been freed from the expectations that they’re only for kids. You can now tell any story you want through animation.