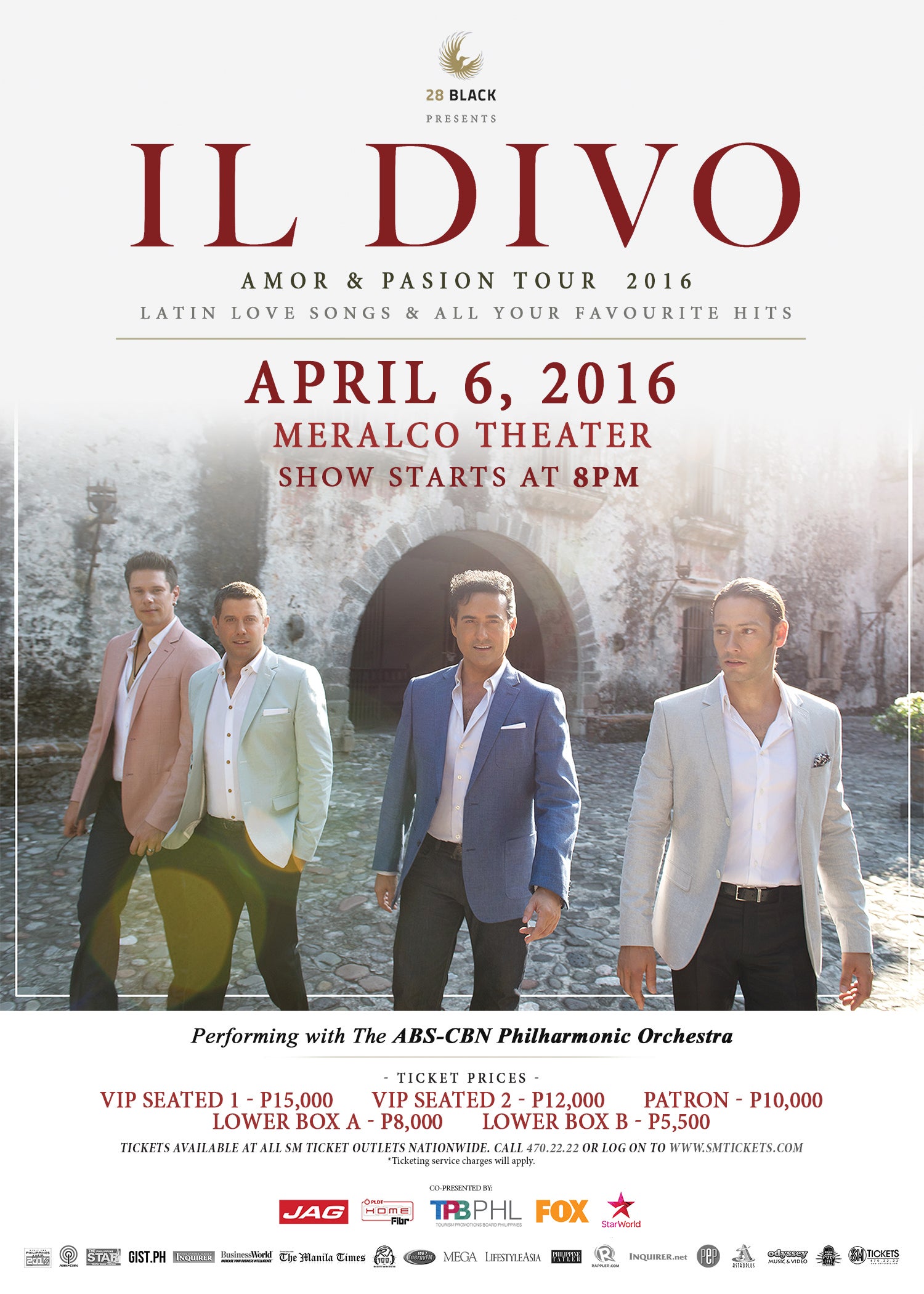 28 BLACK and PULP LIVE WORLD recently announced that the Manila stop of the IL DIVO AMOR & PASION TOUR 2016 this April 6, 2016 will be moved to Meralco Theater, Pasig City. Followers of the Simon Cowell-formed Latin opera quartet comprised of Urs Buhler, Sebastien Izambard, Carlos Marin and David Miller can now enjoy their heavenly music in a more intimate setting. The record breaking classical crossover group that has sold more than 35 million albums worldwide launched their massive 2016 AMOR & PASION World Tour last March 1, 2016 in Mexico City. The new show, based on a journey through the greatest melodies from Central and South America plus new treatments of Il Divo’s biggest known hits, is set to play over 100 shows across 29 countries and 92 cities this year.

Their most ambitious tour to date is in support of the group’s seventh studio album Amor &Pasion, a collection of songs full of love and romance. Inspired by the rich Latin repertoire spanning a century of traditional tangos, smoldering boleros and classic mambas, this show will, for the first time in the group’s career, incorporate dancers and a Latin percussion section joining the Il Divo orchestra. The flavors and sultry rhythms of Spain and Cuba, Argentina and Mexico have set the stage for Il Divo as you have never seen them before. From the standout tango“Por Una Cabeza”, to each member performing a solo song for the first time in an Il Divo show, to highlights such as David Miller from the group braving the traditional Argentinian bandoneon.

Produced by Latin Grammy winner Julio Reyes and released last November 2015, Amor and Pasion has already received such accolades across the world: a nomination for the Latin Billboard Awards Latin Pop Album Artist of the Year (Duo or Group), Classic Album of the Year Award at the Japanese RIA 30th Japan Gold Disc Awards, and Gold album sales in the UK & Spain.

IL DIVO AMOR & PASION TOUR Live in Manila is also brought to you by JAG, PLDT HOME FIBR and TOURISM PROMOTIONS BOARD PHILIPPINES. Tickets to this amazing spectacle are still on sale worldwide via SM Ticket outlets nationwide and online at www.smtickets.com. For more information, please log on to www.pulpliveworld.com. For VIP assistance, please email [email protected].