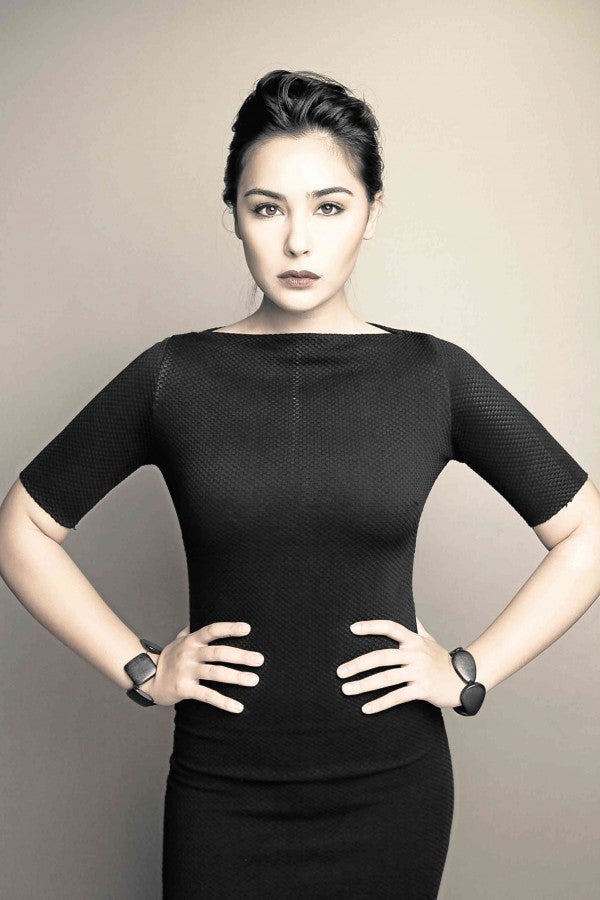 GWEN Zamora rehearsed “walking” like a man with her boyfriend. PHOTO BY DAVID FABROS

Gwen Zamora is the first person to admit that her name will not be on top of the short list of a casting call for a butch lesbian role.

Still, debuting director David Fabros had so much faith in Gwen that he cast her against type as Jeans, a cantankerous cashier, in the CineFilipino comedy caper, “Straight to the Heart.”

“On TV, I usually play dainty princesses and diwatas (goddesses),” she owned up.

Fortunately, she didn’t have to venture far for research. “My PA (production assistant) is a tomboy,” she explained. “I’ve known her for the past six years. So, I just observed the way she moved and talked. I also have a good friend who’s a lipstick lesbian. She’s very feminine, but she has a strong personality.” She relied on her pals in sculpting her character.

Still, on the eve of her first day of work, she was on pins and needles. “I was nervous because it was my first time to play a lesbian,” she recalled. “I kept practicing, but I couldn’t master my walk. I was so frustrated. I always want to be prepared when I get to the set.”

She turned to her boyfriend, actor-turned-politician Jeremy Marquez, for guidance. “We kept walking around the house,” she recounted. “It was like the copycat exercise in acting workshops.”

Gwen realized that men move differently. “Girls sway their hips. But when a man walks, his core is tight, and only his shoulders move.”

Making things extra challenging, she had to be the lone “thorn in an ensemble of roses” that includes Carl Guevara, Kiko Matos, Ricci Chan and Vincent de Jesus as a gang of giddy gays.

She relished the fact that she didn’t have to brush her hair or put on makeup for the part. “It was liberating.”

During the shoot, she would bite her tongue to stop from guffawing. “I wanted to laugh, but I couldn’t because Jeans was always serious and stern…the ultimate buzz kill.”

Jeans is supposed to be the “straight” guy in the cast. “While everyone is jolly, I’d be moping and weeping.”

In a way, her regular stint in the GMA 7 gag show, “Bubble Gang,” came in handy.

“I kept asking myself: I thought this film was a comedy, why am I always crying in my scenes,” she quipped. “But it’s really fulfilling. Tears would fall easily, because the scenes felt so natural.”

Her director quipped: “I am proud of Gwen. I’ve always wanted to work with her. She is ripe for this part.”

“In indie films, actors are given the freedom to express themselves,” she pointed out. “In this movie, the attack was different. I was given more time to prepare and create my character. The process was very collaborative. Things were not rushed.”

Prior to “Straight to the Heart,” she portrayed a surfer chick in Mario Cornejo and Monster Jimenez’s “Apocalypse Child,” which debuted at the QCinema International Film Festival last year.

“It was my most daring role, but I didn’t really bare my body,” she related. “My love scene with Timmy (costar Sid Lucero) is hardcore—it creeps under your skin.”

The CineFilipino film festival runs from March 16 to 22. “Straight to the Heart” premieres on March 17 at Gateway Cinema.

Read Next
Hot trailers: Spidey in ‘Civil War,’ Bran Stark in ‘GoT’
EDITORS' PICK
Leveling up your ‘lutong bahay’ with the kitchen companion you never knew you needed
SM prepares for ‘safe malling’
Notice of 2020 regular meeting of stockholders June 18, 2020
LIST: What to expect in areas under GCQ, MGCQ
Drilon wants repeal of penal provisions in proposed Bayanihan extension law
DOTr bares 2 phases of public transport revival in GCQ areas
MOST READ
LIST: What to expect in areas under GCQ, MGCQ
Hong Kong loses US ‘special status’ — what next?
Duterte approves Metro Manila’s shift to GCQ starting June 1
Bocaue Mayor Joni Villanueva passes away, Sen. Villanueva confirms
Don't miss out on the latest news and information.