James Franco on his Instagram exchange with Pia Wurtzbach 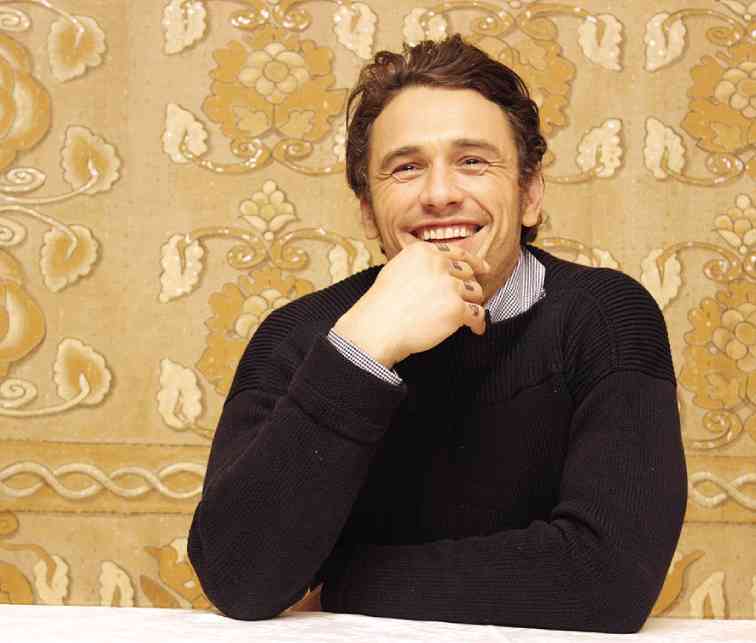 LOS ANGELES—“People told me she had a crush on me, so I was giving some love back,” replied James Franco, his face crinkling into a dazzling smile, when I asked him about his coquettish Instagram exchange with Miss Universe Pia Wurtzbach. It was almost 9 at night at the Montage Beverly Hills.

James looked tired when he walked in, but the Pia topic seemed to suddenly perk him up.

A brief background: In January, the actor posted side-by-side pics of him and the new Miss Universe from the Philippines. James wrote, “I [heart] the Philippines!!! [Heart] 2 @miss universe!!!”

“And Pia responded with ‘I love you more!!!’” I reminded James. She wrote that comment in all caps, followed by three heart emojis. “Whoa!” James exclaimed, his face still lit up with a huge grin. “Somebody is playing matchmaker here.”

“I have actually never been to the Philippines,” said the Golden Globe winner for the TV biopic, “James Dean,” and an Oscar nominee for “127 Hours.”

“I did a movie called ‘The Great Raid’ that was supposed to take place in the Philippines, but we actually shot in Australia. There were a lot of great Filipino actors in that film. I loved working with them.” Those actors included Paolo Montalban, Natalie Mendoza, Bembol Roco, Rez Cortez and Cesar Montano.

“But let’s go back to Pia,” I told James. I wasn’t about to let him go off the topic. “Would you be interested in dating her?”

“I don’t know—what is her life like?” he replied. “She must have a crazy (busy) life. I don’t know how we would even ever get together. We will see what happens, man.”

Asked what love means to him, the man who played Harry Osborn in two “Spider-Man” movies hemmed and hawed. So I said, “Miss Universe. Miss Universe.” Breaking again into the most winning smile, James quipped, “When I think of love, I think of the Philippines.”

“No, you know, I have a very simple concept of love,” he added. “It’s just giving of yourself—that is what love is. It’s an active thing. Love is giving to another.” Take note, Pia.

The actor was casually dressed in a navy sweater, shirt and black jeans. He explained that the letter tattoo on each of his fingers was for a movie he is currently filming. “It says ‘game over,’ because I am a video game designer in the movie.”

James came straight from the “Why Him?” set. “I am doing a movie with Bryan Cranston,” he said. “It’s a comedy directed by John Hamburg, who wrote ‘Meet the Parents’ and directed ‘I Love You, Man.’”

As if he is not busy with his movies and teaching at New York University (NYU), University of Southern California (USC) and University of California Los Angeles (UCLA), James somehow found time to star in “11.22.63,” Hulu’s most ambitious production so far.

The eight-part miniseries is an adaptation of Stephen King’s novel about Jake Epping (James), a teacher who discovers a time portal that leads to Sept. 9, 1958, and goes on a mission to prevent John F. Kennedy’s assassination on Nov. 22, 1963.

Asked what era he would like to time-travel to if he has the power, James answered. “I have been asked about five million times. I take the lesson of (Woody Allen’s) ‘Midnight in Paris.’ It seems like the past is always better, but I don’t know.

“I am reading about Hollywood in the 1940s right now, a book called ‘City of Nets.’ It’s exactly the Hollywood I would want to work in—that’s when they made a lot of classics. It would be cool to see that.”

On what made him accept this TV project considering his hectic acting and academic careers, James replied, “There are a lot of reasons. I read a book called ‘Difficult Men,’ about a lot of the show runners of this new third golden age of television, specifically David Chase, David Simon, Vince Gilligan and some others. That turned me on to this new mode of television—these series that have a more limited number of episodes, so that season-long arcs can be sculpted. Episodes are no longer just one-offs.

“And I also like the fact that they can be on these cable networks or streaming so that the content can be much more adult. The idea of long form turned me on. I signed on—or at least I was geared up for two series.

“I had been talking to David Simon. I called him over the holiday break like a year ago. I said, ‘Let’s do that series that you were talking about.’ At the same time, I read the Stephen King book and loved it. Through a friend, I got Stephen King’s e-mail address, and I wrote to him because I heard Stephen gave rights very generously. So I thought, maybe I have a shot. 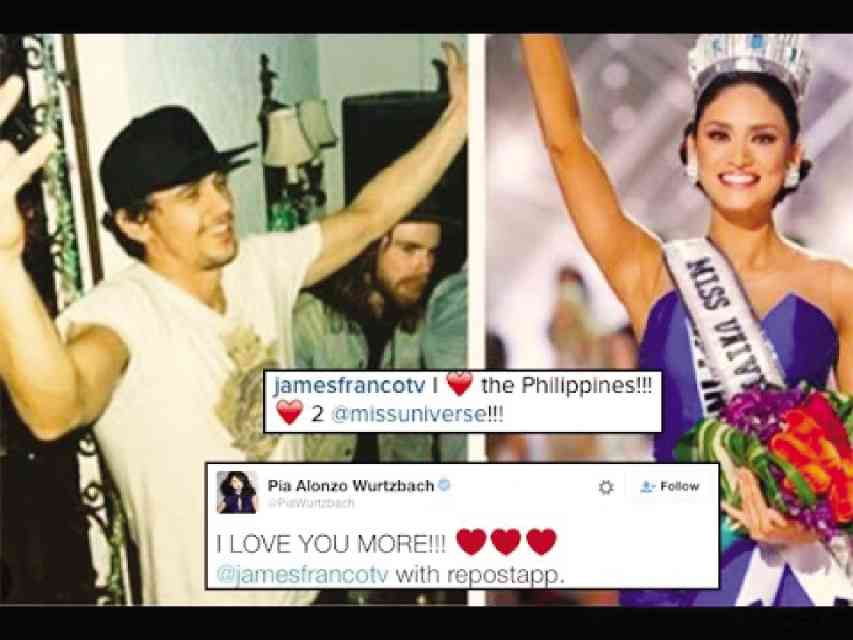 The exchange between the actor and Pia Wurtzbach in January

“Stephen was very nice. He wrote back and said, ‘I would love to give you the rights, but JJ Abrams has them, and he is going to do them as a miniseries.’ So I thought, that’s done; I will never get that. I was writing a column for Vice (magazine) at the time, so I wrote a little piece about the book and how much I loved it and what I loved about it.

“Two weeks later, I got an e-mail from JJ. I didn’t know JJ. It was through Seth (Rogen) who said, ‘JJ wants to e-mail you.’ I was like, alright, OK. JJ wrote, ‘Everything you liked about the book I liked. This is a long shot—I don’t know if you would ever do a miniseries. But I think you would be a great Jake Epping.’

“The first thing I said was, ‘I would love to do it. I originally wanted to develop it myself so, if I could direct a little, I am in.’ And JJ said, ‘That’s great. I have no problem with that.’ So that was it.”

James reported that he spent a shorter time making “11.22.63” than some of his films. “I have to say, it was really satisfying,” he said. “I spent like five months on this TV series, and it was still less than the time that I spent on ‘Oz (the Great and Powerful).’ Now we have eight to nine hours of this series where a character really gets to be developed, a story that doesn’t have to be abbreviated and has room to breathe.”

And he got to direct one episode. “One of the things that I was excited about directing one episode of a series was that I was so used to making independent films,” said the multihyphenate who has quite a number of directing credits. “On those movies, I willed them into being. I, more or less, had complete control over the final project, which was great.

“But with this TV series, I was going to be one of a number of directors. The look and style was already set in place, so I took that on, which was interesting.

“I learned a ton as a director. I teach filmmaking at USC and UCLA, and one of the things I emphasize is collaboration. For me, this was a new lesson in collaboration. And so, I think I am a different director now.”

On how his teacher character is different from him, James clarified, “It’s a different situation because Jake teaches in high school and I teach graduate school. The students in graduate school are paying a lot of money to be there, and they want to be there—so, usually, I don’t have to do too much motivating.

“My second thought was, actually I do teach high school now. Once a month, I go back to my high school (Palo Alto High School in northern California). I teach a film class. I basically run it the same way I run my graduate classes. I have 40 high school students.

“I hooked them up with one of my producers and my cinematographer. They are making a real movie there.”

In the miniseries, the 37-year-old’s character cried while reading John Steinbeck’s “Of Mice and Men.”

On what books, films or TV shows made him cry in real life, James said: “I do that (crying) a lot more with movies and TV, because with a movie or television show, you have actors embodying the characters.

“Whereas, in a novel, you are translating their words in an imagination, so it’s a different experience. That is not to say that books haven’t moved me. But I did cry last night during the Oscars. I did my stupid laugh-cry when Lady Gaga did that song.”

Where does James, who enrolled in and finished graduate degree programs (seemingly, all at the same time at one point) at NYU, Columbia, Yale, Brooklyn College and Warren Wilson College, get his energy?

He answered: “My life is filled with what I love. Doing so I am assuming I get energy from that.”

And how does he relax? “I still do what I love,” he said with a sheepish smile. “When I have downtime, I read a book, or watch a movie or a play.”

Note to James: As the reigning Miss Universe, Pia is now living in New York. This brand-new matchmaker suggests to James: How about asking Pia to watch a Broadway play with her?