Leo vs the politics of greed 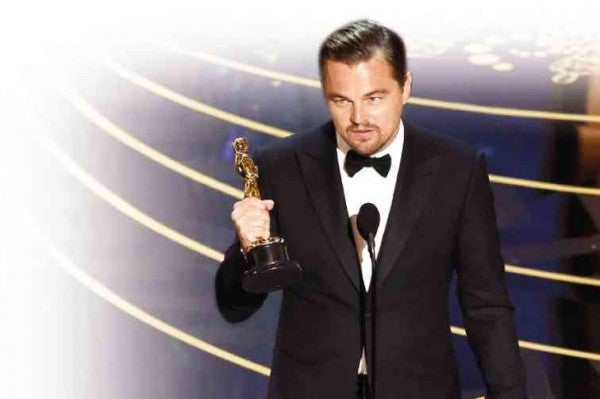 LEONARDO DiCaprio puts his money where his mouth is. After donating $3 million to the World Wildlife Fund and coproducing the cautionary documentary about global warming, “The 11th Hour,” the 41-year-old screen superstar raised his concern about the mounting dangers of climate change when he spoke to Pope Francis at the Vatican last Jan. 28.

Then, in his acceptance speech at the Oscars last Sunday (Monday morning in Manila), where he won his first best actor statuette (for Alejandro González Iñárritu’s “The Revenant”), he wasted no time in seeking support for his advocacy, reminding viewers about what we all stand to lose if we continue to disregard the warnings about global warming.

Leo said: “‘The Revenant’ is about man’s relationship with the natural world—a world that we collectively felt in 2015 as the hottest year in recorded history … . Climate change is real—it is happening right now. It is the most urgent threat facing our entire species, and we need to work together and stop procrastinating. We need to support leaders around the world who do not speak for the big corporations, the big polluters, but who speak for all of humanity … for our children’s children, for the indigenous people … and for the billions of underprivileged people whose voices have been drowned out by the politics of greed … Let us not take this planet for granted. I do not take tonight for granted. Thank you all for this amazing award.”

Leo won his first Oscar after six nominations (five for acting and one for coproducing Martin Scorsese’s “The Wolf of Wall Street”)—and a 22-year wait. He was first cited for his stirring performance in “What’s Eating Gilbert Grape?,” which was shot when he was only 19 years old. Rito P. Asilo