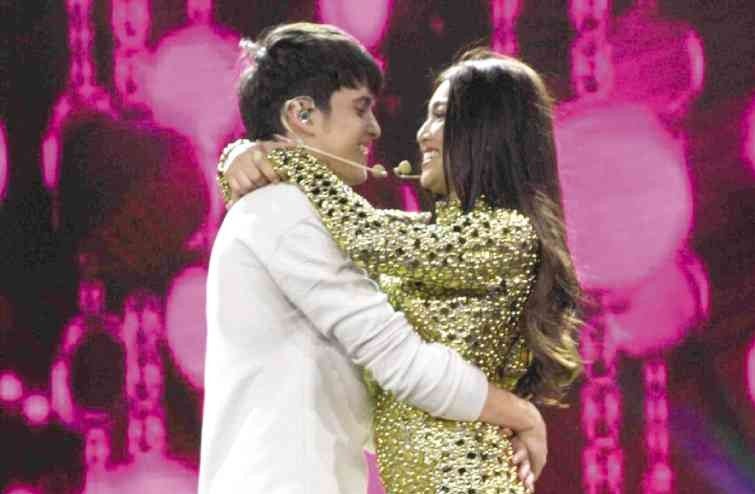 In the spirit of fun, I accepted the invitation of my friends at the Kapamilya network (specifically Aaron Domingo of ABS-CBN’s Corporate Communications) to join the JaDine “kulto” at Araneta Coliseum during James Reid and Nadine Lustre’s sold-out “JaDine in Love” concert last Feb. 20 with my fave Belo doctor, Carlo Lozada.

It was the popular love team’s way of thanking their legions of fans for the success of their teleserye on ABS-CBN, “On the Wings of Love” (OTWOL).

The series is on its final week, so the entire cast will host a grand viewing party on Feb. 26 at Ynares Sports Arena.

Avid fans of the show are called “Otwolistas.” They came in full force and didn’t get tired of waving pink and blue glow sticks all throughout the concert. Some of them even flew from abroad just to watch their idols’ concert live. For Otwolistas, the sky’s the limit because their hearts are in it.

Not only was the timing right, James and Nadine were also ripe to invade the Big Dome. It was giddiness overload as they sang cheesy duets and mushily bantered in between. They fondly called each other “wifey” and “hubby.”

JaDine’s upbeat song-and-dance numbers were a celebration of exuberance. Everything about the concert had such a hip and cool vibe. It made me feel like a high school girl once again as I gamely joined in the crowd’s swooning over JaDine’s every glance, touch, embrace and move.

Vice Ganda brought the house down with his antics, especially when he flirted with James and Elmo Magalona.

Nadine’s sexy Spice Girls number with her friends, Yassi Pressman and Myrtle Sarrosa, elicited oohs and aahs from the crowd. The rest of the OTWOL cast joined JaDine onstage to thank their supporters.

My favorite part of the show was JaDine’s sensual dance number that let their bodies do the talking. It was executed with finesse and grace. Spoken word artist Juan Miguel Severo’s piercing poetry (which was interspersed in the dance) hit all the right spots. It was poetry in motion.

JaDine’s mash-up version of two hit songs from different eras with the same title, “Ikaw” (one by Sharon Cuneta, and the other by Yeng Constantino), made me relish the vicarious thrill of young, que sera sera (what will be, will be) kind of love.

The highlight of the concert was JaDine’s wedding-like number. James, in a tuxedo, walked through the coliseum and waited for Nadine at the steps of the stage. In a white long gown, she made a dramatic entrance. Together, they went up the stage as Erik Santos and Kyla serenaded them.

To complete the romantic mood, the ABS-CBN Philharmonic Orchestra led by Gerard Salonga played “On the Wings of Love.” The “Pambansang Hubby and Wifey” waltzed like nobody was watching.

Based on the frenzy that night, it looks like Otwolistas will have a major jet lag from flying high on the wings of love. James and Nadine will keep soaring as they embark on their “JaDine in Love” World Concert Tour soon.

Bravo, JaDine, for making even the jaded ones believe in the magic of l’amour all over again.