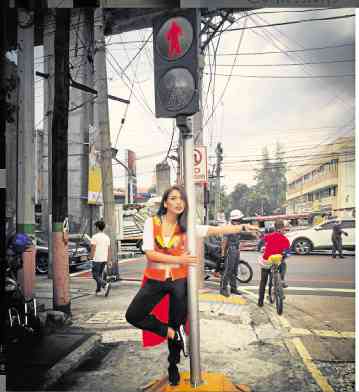 WE’RE SO glad that Aicelle Santos is finally getting the attention and breaks she deserves on GMA 7 shows. In the recent past, she scored big in an “extreme” talent tilt involving “Eat Bulaga’s” resident stars and regular players, and is currently a judge on the show’s “Grabe Sya” and “Just Duet” talent competitions.

Just last week, she added further to her participation in the popular noontime program by being put in solo charge of its new “Traffic Diva” “impromptu” singing tilt!

The breaks are great, but they’ve required Aicelle to do some pretty unusual stunts that could terrify or embarrass some more timorous talents. Thank goodness, the “retroactive” singing star is “game” and “palaban”—so on with the “extreme” show:

For starters, her winning act in the show’s in-house stellar talent tilt some months ago required Aicelle to belt a big song number out on a busy street—while being lifted way high up in the air, in an “elevating” pod used by Meralco electricians to fix defective electric posts and circuits! That turned out to be a show-stopper that simply couldn’t be beat!

As the show’s new “Traffic Diva,” Aicelle is again prowling the busy streets at high noon—she seems to thrive in that smoky, dusty environment, huh?

This time around, however, she sticks to terra firma, and instead snaps into action when the traffic light turns red, and vehicles are idling.

Very quickly, she scouts around for a jeepney or cab driver who looks “game” enough to do her bidding, and urges him to do an instant karaoke act by singing part of a popular song—whether he can sing well or not!

The instant singing discovery’s incentive is the cash prize that comes with the streetwise showcase—and a good time is had by all!

The show should be lauded for most astutely picking Aicelle to take antic charge of its new talent feature. She’s exactly right for it because her big, brassy singing voice can quickly capture people’s attention even on a loud and busy thoroughfare—and she can get an entertaining performance even from the most surprised and nonplussed driver, in 30 seconds flat!

The 51st International Eucharistic Congress recently held in Cebu City was like a spiritual refresher and boost for thousands of delegates from all over the world, highlighted by incisive and insightful talks by leading evangelists and theologians.

TV evangelist Rev. Robert Barron underscored the need to spiritually hunger for the Bread of Life, and to fill that hunger by actualizing the Eucharist’s presence and influence in our own lives.

After that happens, the natural next step is to share the faith, love and joy with others—as vivified by doing what more people are doing now, becoming actual missionaries to the rest of the world.

For his part, Cardinal Charles Maung Bo described the Philippines as Christianity’s shining light in Asia, a bright beacon of evangelization.

We may live in “the disaster capital of the world,” but those adversities have tested us and made us stronger, more vibrantly faith-full, and truly hopeful—which made the Philippines that perfect venue for the 51st International Eucharistic Congress and its “Hope of Glory” theme.

He urged Catholics to vivify Christ’s passion for today’s contentious and fractious times. The struggle now is for human dignity, a more enlightened view of man created in God’s image, and thus worthy of respect and equal treatment.

In addition, he called for the creation of a new and more equitable economic order and system, with many more people sharing and partaking of God’s bounty in the natural resources of our home planet.

As for Rev. Fr. Paul Wu, he shared that the theme of Eucharistic Hope isn’t just a theological truism, but should be actualized on a daily basis in people’s lives—as communion, promising the gift of salvation and life in the Lord.

This long-range view and goal give meaning to the journey of life that we all undertake—providing a sense of direction and purpose for all humanity.