‘X-Files’ a greatest hits rehash, but still a welcome comeback 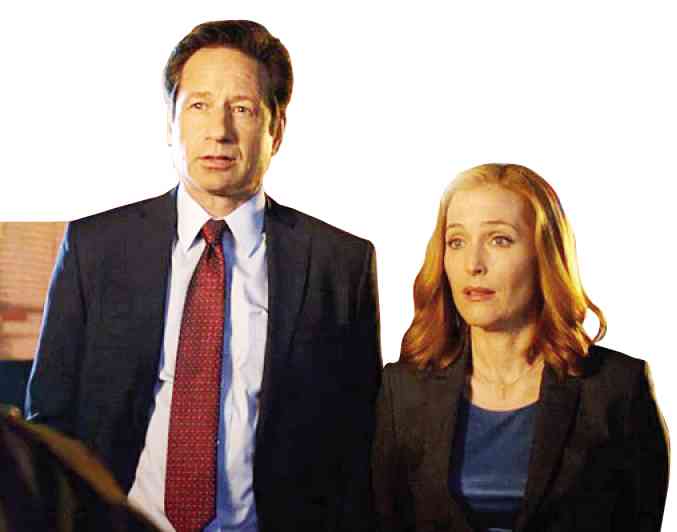 David Duchovny and Gillian Anderson return as FBI agents Fox Mulder and Dana Scully, respectively, who are assigned once more to the X-Files, to deal anew with mysterious activities involving extraterrestrials and the paranormal. Creator Chris Carter and his creative cohorts pit the duo against the bizarre and forces beyond their ken. These strange encounters often end up as unsolved cases.

That’s how it is again, as the current “X-Files” brings back Mulder and Scully into the thick of enigmatic things, pondering the unponderable, while contradicting each other on new discoveries.

Mulder is still the guy who wants to believe; Scully overanalyzes her partner’s eagerness to accept the seemingly inexplicable and debunks his declarations. They’ve spent many years encountering creatures, monsters and unclassifiables of all shapes and sizes—and they’re sort of back to square one!

Four episodes into it, it’s more of the same: The massive conspiracy concerning aliens has resurfaced and brings back a persistent villain, and there usually aren’t conclusive answers to conundrums of the week. The rebirth of the conspiracy angle can be off-putting—the older incarnation of the show became too convoluted because of the larger arcs’ twists and puzzles that dragged on for too long.

Anderson is back in fine acting form; she’s especially more intriguing now because Scully is being updated, despite her tiring skepticism. The highlights include her dramatic moments during a family tragedy, as well as her recurring concern for her and Mulder’s child, whom they sent away for adoption over a decade ago.

Duchovny still speaks in that distinctive monotone; Mulder is a little wiser and strangely funnier—he’s still devoted to his mission, although he admits that believing in aliens has become a punch line in a world where most people are unwary. (And 2012 has come and gone, the once-ominous date trumpeted by the older episodes as the start of some alien-fueled end times—it gets mentioned briefly here, with only a vague mention of its true significance.)

The return is a welcome one—a “greatest hits” rehash, in a way. But with only a few episodes left, will it satisfyingly answer the new conspiracy-related questions it posed? And will there be a changing of the guard a la “Star Wars,” to make the franchise fresh and accessible to the next generation? Only time will tell. This compressed season should spark new interest—and, just as importantly, make room for necessary change.