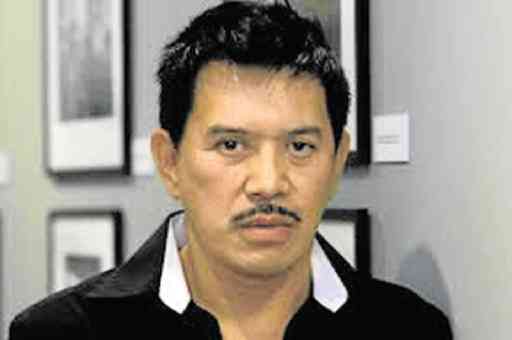 The Francophile in me fell in love with the Frenchy decor of the place. It’s adorned with Cannes Film Festival posters of various years and there are cute little Eiffel Tower lamps on each table. Its dishes are yummy yet affordable.

The joint is award-worthy just like the owner. I enjoyed their frozen margarita as I proposed a toast to Direk Dante’s (Brillante’s nickname) continued success. He is set to leave for his nth film festival abroad. This time around, he is off to Colombia where there will be an exhibition of all his films. I chided him that he might bump into Miss Colombia (the controversial Miss Universe 2015 1st runner-up).

Brillante has become impervious to issues affecting the industry. He has come to terms with the realities plaguing our society. But this does not mean that he is indifferent. He has adopted an attitude of accepting things that cannot be changed, yet doing things that he feels can effect change.

Merci beaucoup, mon ami (thank you very much, my friend) and Rene for such a splendid evening. It’s not everyday one gets a chance to see Direk Dante in his unguarded moments. The Cannes Film Fest best director is so grounded that being starstruck around him is something he will make you suppress without you realizing it.

Here are some of the things I learned about Direk Dante:

He loves taking care of his plants. His lush garden is a testimony to his having a green thumb.

He hates actors who are “acting.” He wants them to be the character they portray. When his actors begin to act, he pans the camera to other objects in the scene.

His favorite places are Turkey and Portugal.

He had a funny encounter with Jackie Chan. During an awards night, he was in the men’s room fixing up and someone kept knocking. When he opened the door, it was Jackie Chan, who badly needed to pee. Since Jackie was relieved to finally get his turn, he hugged Brillante tightly.

He does not give scripts to his actors. He wants them to just fully understand the characters and gives them time to research and study them.

He devotes more time to preproduction, brainstorming and coordinating every single aspect in the production. The actual shoot then becomes easy and smooth when everything is predetermined.

He doesn’t shout or curse on the set, even when there are untoward incidents. He will just call his assistants to fix them.

When the weather does not cooperate, he makes use of the situation as part of the story.

He makes sure that the atmosphere on the set is always positive. He cheers up everybody by cracking jokes or making fun of himself.

Kids these days, just like adults, are into #OOTD (“Outfit of the Day”). Revamp children’s outfits with stylish clothes from Little Hugs, the apparel house of Marian Fontanilla (Dawn Zulueta) in the Kapamilya teleserye, “You’re My Home.”

(It is available in department stores nationwide and The ABS-CBN Store.)