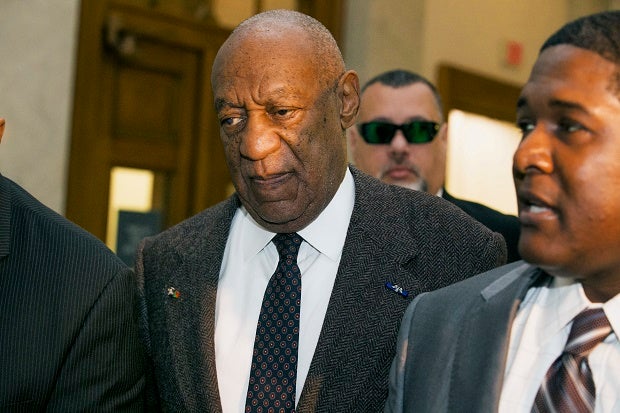 Actor and comedian Bill Cosby arrives for a court appearance Wednesday, Feb. 3, 2016, in Norristown, Pa. Cosby was arrested and charged with drugging and sexually assaulting a woman at his home in January 2004. AP

PHILADELPHIA — Lawyers for Bill Cosby tried again Friday to have his criminal sex-assault case dismissed, asking an appeals court to consider whether Cosby had a binding agreement that he would never be charged.

Defense lawyers argue that Cosby had a promise from a former prosecutor that he wouldn’t be charged over the 2004 encounter with a Temple University employee and should therefore testify in the woman’s civil lawsuit.

He did, in a deposition unsealed last year that prompted a new prosecutor to reopen the case before the 12-year statute of limitations expired. Cosby said under oath that he gave the accuser three pills before engaging in sexual contact that he called consensual. He also acknowledged getting prescriptions for quaaludes so he could give them to women he hoped to seduce.

Montgomery County District Attorney Kevin Steele filed felony sexual assault charges against Cosby in late December, based on new evidence that included the deposition testimony and the dozens of other accusers who have come forward since to say that Cosby drugged and molested them. Cosby has denied wrongdoing.

A key question if the criminal case goes to trial is whether the other women’s testimony or the lengthy Cosby deposition could be used in court.

But defense lawyers hope the case ends long before then.

Steele, responding to the appeals, said his office opposes any further delay in the case and does not think the defense has a right to appeal before the preliminary hearing.

Defense lawyers argue that Cosby’s case became a “political football” in Steele’s fall campaign for office. The person Steele defeated in the election, former District Attorney Bruce L. Castor Jr., testified at a hearing this month that he had promised not to charge Cosby in 2005. He felt the evidence was insufficient to file charges, in part because accuser Andrea Constand waited a year to contact police.

The Pennsylvania case is the only one to lead to criminal charges. Common Pleas Judge Steven T. O’Neill, who denied Cosby’s motion to dismiss the case and disqualify Steele, has scheduled a March 8 preliminary hearing.