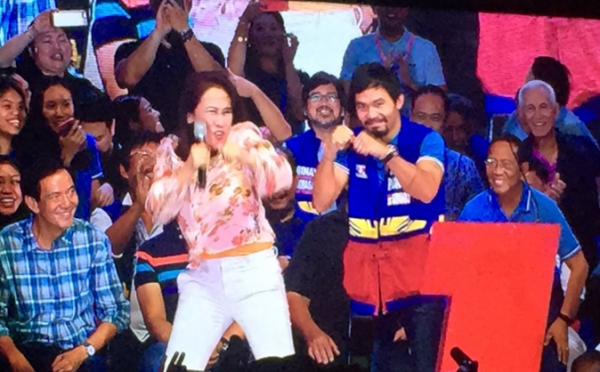 In welcoming Binay, De las Alas said the Vice President was among the few who visited her when her mother died on New Year’s Eve.

She said she did not receive any talent fee to perform at the proclamation rally.

Dancing to Jennifer Lopez’s song “Live It Up,” De las Alas jumped while dancing wildly before asking Binay to dance with her.

He gamely stood up and danced—or marched like a soldier—beside De las Alas.

The comedienne then asked to dance with Binay’s vice president Gringo Honasan who showed his moves by clapping his hands and thrusting his hips forward and backward.

When it was time for Pacquiao to dance, the senatorial candidate showed a fighting pose with his clenched fists, drawing laughter from the crowd.

The two, who danced as their mother was introduced on stage, twerked to the song “Twerk it like Miley.”