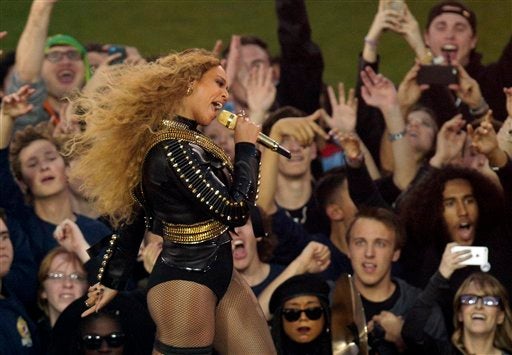 A day after the Super Bowl, people are still parsing over each frame from Beyonce’s halftime performance, trying to glean the messages, both subtle and overt, that made for a stunning display of unapologetic blackness and political activism during one of the most-watched events of the year.

The halftime show — seen by an estimated 112 million people — is drawing praise from her fans and consternation from critics.

While Beyonce hasn’t commented on the specifics of the show, the imagery speaks for itself. Beyonce’s dancers donned berets, sported Afros and wore all black, similar to the style of the Black Panther party, founded in 50 years by Huey P. Newton and Bobby Seale in the Bay area — the location of this year’s Super Bowl. At one point during their routine, the dancers formed an “X” on the field, which some people are taking as a tribute to slain black activist Malcolm X.

In addition, Beyoncé and her dancers raised a fist to the sky, reminiscent of the black power salutes of the 1960-70s, made popular internationally by Tommie Smith and John Carlos, who raised their fists to the sky after winning gold and bronze at the 1968 Summer Olympics.

Several people applauded her embracing the history of black activism and of her own identity. Her new song “Formation,” which she sang during her performance, includes the lyrics “I like my baby hair, with baby hair and Afros. I like my negro nose with Jackson Five nostrils.”

“I think that you’re hard-pressed to find that demonstrative an example of performative blackness on stage, on such a high profile stage,” said Damon Young, editor in chief of the website www.verysmartbrothas.com , on Monday. “Between the dancers coming out dressed as Black Panthers to the lyrics to the song, again … I can’t recall another time you saw that unambiguousness with a performance on a large scale.”

Melina Abdullah, a Black Lives Matter activist and leader in California, said it’s wonderful that artists like Beyonce “are willing to raise social consciousness and use their artistry to advance social justice.”

READ: All of the Reasons We Loved Beyoncé, Coldplay, and Bruno Mars at the Super Bowl 50

But not everyone appreciated Beyoncé’s performance. Republican Congressman Peter King of New York immediately condemned Beyoncé for her performance, saying on Facebook “her pro-Black Panther and anti-cop video ‘Formation’ and her Super Bowl appearance is just one more example of how acceptable it has become to be anti-police.”

(While there were no direct references to police on the Super Bowl field, the video, released Saturday, features a young black child in a hoodie dancing in front of a line of police officers, and graffiti that reads “Stop Shooting Us.”)

And all of this comes during heightened racial tensions across the country, particularly in regards to allegations of police brutality. Hollywood is grappling with issues of race as well, with Spike Lee, Will Smith and Jada Pinkett Smith planning to skip the Academy Awards after no actors of color received Oscar nominations for a second year in a row.

Lakeyta Bonnette, a Georgia State University political science professor, said more and more celebrities like Beyonce are moving toward public activism. In 2014, basketball superstar LeBron James and other NBA players wore “I can’t breathe” T-shirts to their basketball games: “I can’t breathe” were the last words of Eric Garner, a black man who died after a physical altercation with police in New York City.

But some people have complained that Beyonce injected politics into a sports event. On Monday’s Fox & Friends, former New York City Mayor Rudolph Giuliani slammed her tributes to black activism during the halftime show when performers are “talking to Middle America.”

“I thought it was really outrageous that she used it as a platform to attack police officers who are the people who protect her and protect us, and keep us alive,” said Giuliani, who said he would have preferred “decent wholesome entertainment.”

To be fair, it wasn’t just Beyoncé that the 71-year old Giuliani didn’t like. He called the whole halftime show “ridiculous.”

“I don’t know what the heck it was. A bunch of people bouncing around and all strange things. It was terrible,” he said. “Actually don’t even know why we have this. I mean, this is football.”