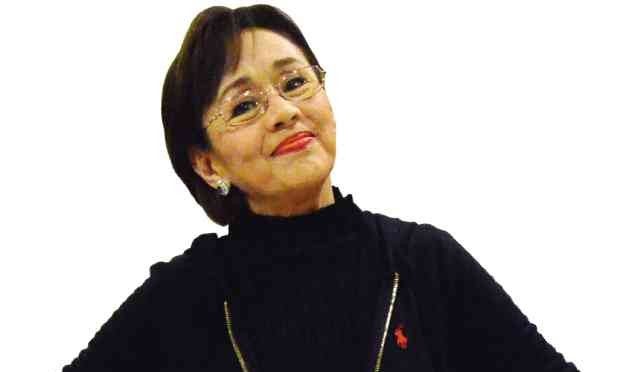 Vilma Santos can just sit on her laurels if she wants to. But the Star for All Seasons is still at it. In Star Cinema’s “Everything About Her,” Ate Vi’s brilliant portrayal of a distraught mother and a mean boss is the result of her blood, sweat and tears.

I immediately texted Ate Vi after we gave her movie a grade of A at the Cinema Evaluation Board. I told her that she should already prepare her acceptance speech, because she is bound to win numerous best actress awards again. Ever so humble, she replied: “Thanks so much, friend. Please don’t make me cry. I appreciate the positive comments, but I don’t want to get stressed about awards.”

That’s the thing about Ate Vi. She’s got it all, yet she doesn’t let it go to her head.

Here’s my one-on-one with Ate Vi:

What was it like working with Angel Locsin, Xian Lim and director Joyce Bernal for the first time?

Interesting and exciting. I learned new things from them. It was inspiring because the three of us were so focused on our roles, and we were well-guided by Direk Joyce. It was a riot during break time, but when the cameras started to roll, we all turned serious.

What’s your favorite line in the movie?

What’s your advice to your son, Luis Manzano, and Angel now that they are going through a rough stage in their relationship?

They’re mature enough to handle their relationship and problems… As a mom, I’m here to guide them. Let’s just give them space because I know they still love each other.

How did your role as Vivian impact on you as a mom and as a governor?

It reminded me that as Vilma—a mother and governor of Batangas, I must have time management and set my priorities. It made me realize all the more that family comes first. Next are my duties as governor, followed by my show biz commitments and social activities.

Even if I’m gracious, don’t abuse me or push me too hard, because I fight back when I know I’m right. But I also know how to apologize when I’m wrong. And I am always willing to learn.

Pia Alonzo Wurtzbach’s grand homecoming at the Big Dome was not complete because our very first Miss Universe, Gloria Diaz, was missing in action.

Glo’s Miss U victory in 1969 was a major turning point for Filipino women. It made the world notice the beauty of Filipinos.

Bravo, Glori, for bringing glory to the country! Pia and Glo are of the same mold. To this day, Glo hasn’t lost her charms. In the hearts of Filipinos, she will never be dethroned as our Miss Universe.

Just like in beauty pageants, here’s the question-and-answer portion with Glori:

Why were you absent during Pia’s homecoming?

I just got back from Japan.  It was so iffy because during the time she came home, I had already made other plans. I figured it will go well, anyway.

You don’t seem to age. How do you manage that?

I’ve been trying to look preserved over the years … I have kids, so they take over in time.

What do you think of Pia?

She is what we, Filipinos, waited for so long. She’s elegant, smart and beautiful—almost like my daughter, Belle (actress Isabelle Daza)! That probably is the greatest compliment I could give Pia. She made us all proud.

It’s entirely up to her to decide.