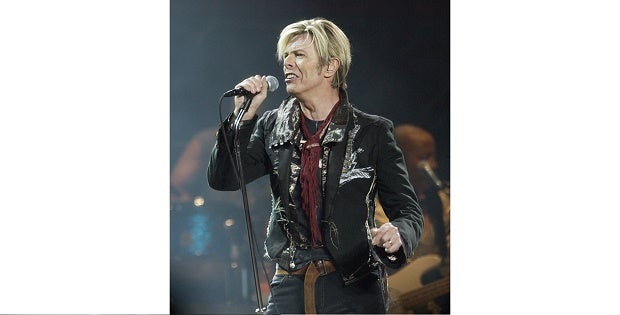 In this Dec. 15, 2003 file photo, singer/songwriter David Bowie launches his United States leg of his worldwide tour called “A Reality Tour,” at Madison Square Garden in New York. Bowies family said they are planning a private ceremony for the late icon and continued to ask for privacy. His family posted a noted titled Thank you on Bowies websites as well as his social media pages on Thursday, Jan. 14, 2016. Bowie died Sunday, Jan. 10, after battling cancer for 18 months. He was 69. AP File Photo

LONDON, United Kingdom—David Bowie dominated the weekly British charts out Friday, commanding a quarter of the top 40 albums as mourning fans rushed to buy his music.

The Londoner, who died from cancer aged 69 on Sunday, had 19 albums in the top 100 and 13 entries in the top 100 singles, ranging from songs dating from the 1960s to tracks off his new album.

Bowie released his new album “Blackstar” last Friday, which was already heading to number one before he died.

Nine other Bowie albums were in the top 40, ranging from compilations to classics like “Hunky Dory” and “Ziggy Stardust.”

The singer-songwriter’s tracks were streamed more than 19 million times on recognised audio streaming services such as Spotify and Deezer.

“Bowie made so many great albums, constantly reinventing himself, that everyone has their own favourites and fans are clearly reminding themselves of his massive contribution to popular music by buying these great, iconic works,” said Official Charts Company chief executive Martin Talbot.

“Lazarus” and “Blackstar” from his new album were at 45 and 61 respectively.

“Heroes” previously peaked at number 24 on its original release in 1977.

Bowie albums in the UK top 40:

Why David Bowie will live forever