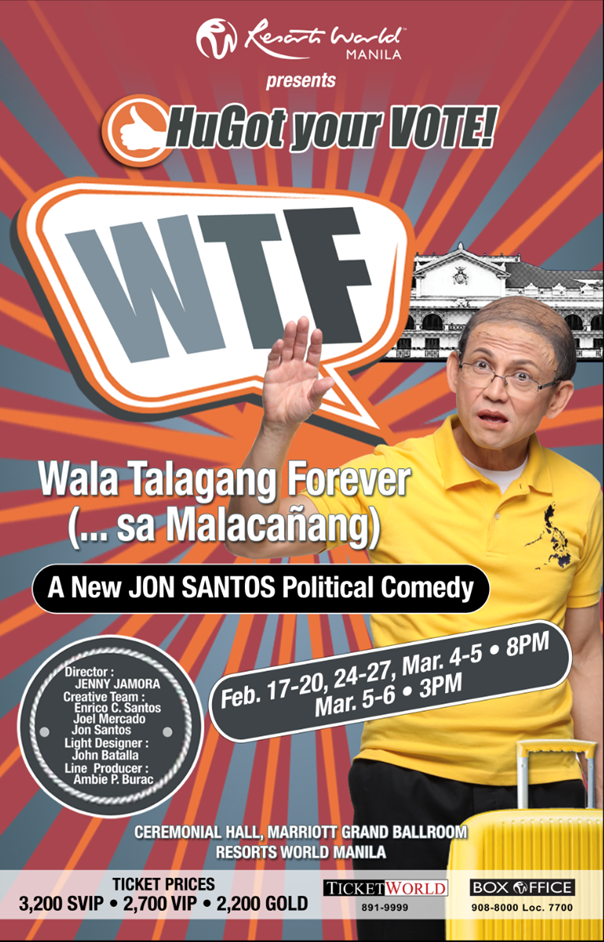 In local pop culture, you know you’ve made it when Jon Santos has taken the time to impersonate you in one of his shows. With over 50 impersonations to his name, Jon tackles Philippine politics anew in his upcoming show HuGot your VOTE! WTF: Wala Talagang Forever (Sa Malacañang) at the Ceremonial Hall of the Marriott Grand Ballroom in Resorts World Manila (RWM) this February and March.

With the national elections just around the corner, Jon concocts his freshest comedy material and spot-on impersonations of Philippine presidentiables which promise to make audiences laugh out loud.

Jon’s impressive know-how on make-up and costume plus his string of hilarious acts have endeared his audiences throughout the years. His popular impersonations of Vilma Santos, Armida Siguion-Reyna, Joseph Estrada, Cory Aquino, Juan Flavier, and Fidel V. Ramos have put him at the top of his class with such veteran comedians as Willie Nepomuceno and Tessie Tomas, both of whom are his mentors. Now with over 20 years of impersonating celebrities, Jon comes back to his favorite topic for his upcoming show. Comedy fans may expect Jon to showcase his new personas as Madonna on how elections are more fun in the Philippines, Senator Miriam’s unofficial address to voters, P-Noy’s last days in Malacañang, Grace P.’s exclusive interview with Karen D., Erap’s plea for ‘A Second Chance’, Mommy Dioning’s role as cupid to Manny and Jinky, and witness the hilarious side of the latest current events in the country through the witty mind of the funnyman himself.

HuGot your VOTE! WTF: Wala Talagang Forever (Sa Malacañang) is presented by Resorts World Manila and directed by Jenny Jemora with the creative team of Enrico C. Santos, Joel Mercado, and Jon himself, plus light design by John Batalla and line produced by Ambie P. Burac.

Tickets are now available at the RWM Box Office located at the ground floor of Newport Mall, and all TicketWorld outlets. Visit www.rwmanila.com or call the Tourist/Visitor Hotline at (02) 908-8833 for more information.

Also home to RWM is NEWPORT Mall which features international luxury brands, state-of-the-art movie theaters at Newport Cinemas, an award-winning, ultra-modern Newport Performing Arts Theater (NPAT), and a cozy, 24/7 entertainment hub at Bar 360. Dine in one of almost 50 restaurant outlets offering a diverse selection of local and world cuisine, prepared by top Filipino and foreign chefs and paired with a wide selection of the finest wines and popular liquors.