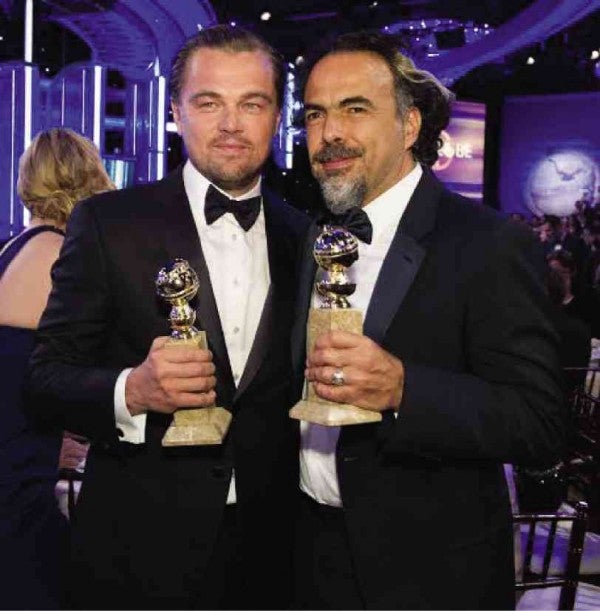 LOS ANGELES—Exes Jennifer Lawrence and Nicholas Hoult chatted. “Titanic” stars Leonardo DiCaprio and Kate Winslet reunited after the latter congratulated the former for his best actor-drama win (she also won best supporting actress honors). “Inside Out” director Pete Docter—you can’t miss him (he’s 6 feet 4 inches tall) inside the ballroom—walked over to the table of George Miller and talked to the “Mad Max” director.

These were among the sidelights not captured by the TV cameras at last Sunday’s 73rd Golden Globe Awards at Beverly Hilton Hotel in Beverly Hills. My long day started with an interesting sight on the red carpet—way before the stars arrived—a procession of several bomb-sniffing dogs that made the reporters and photographers in the media line smile.

When the arrival madness began, signified by the screams of the fans in the bleachers, the fashion procession began. Jennifer reminded me of Julia Roberts who did the same thing a few years ago—the nominated “Joy” star walked to the bleachers and shook hands with some fans. That’s why these women are stars. They know how to reciprocate the love of their followers.

Other standouts at the red carpet entrance were bosom-baring Katy Perry (who quipped to Ryan Seacrest that she “brought the globes”), Jaimie Alexander and Kate Bosworth. 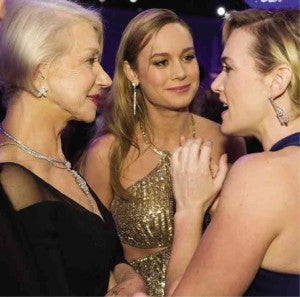 Several stars, from Channing Tatum to Jon Hamm, admired my tux by Oliver Tolentino, who recently made a splash when he had gowns rush-delivered to Pia Wurtzbach for the Miss Universe preliminary competition. (Pia, who chose Oliver’s red-sequined gown, went on to win.)

From the red carpet to the after-parties, the compliments on my tux from friends and total strangers did not stop. I pointed at Oliver, one of the Filipino guests at Hollywood’s party of the year, which included filmmaker Senedy Que and Cebuano heritage conservation and grassroots tourism proponent Boboi Costas (both flew from Manila for the event) and top Southern California dermatologist Tess Mauricio.

For the first time in many years, most of the stars followed the notice to arrive early. So the arrivals frenzy quieted down 20 minutes before the 5 p.m. show. But in the media line, the screaming, this time from the photographers, continued as some of the A-listers posed and preened.

I made it inside the International Ballroom just in time to eat dessert only, as usual, since by that time, all dinner plates have been removed by the waiters.

The schmoozing among the talents during commercial breaks seemed more frenzied than usual this year.

Best actor nominee Will Smith was one of the most popular in the room, as he smiled and laughed as he chatted with Quentin Tarantino (who also engaged his fellow filmmaker Alejandro G. Iñárritu in an animated  tête-à-tête) and other guests.

David Oyelowo visited Brad Pitt at his table as Ryan Gosling sat by.

Nominee Gina Rodriguez went over to the “Narcos” table and conversed with cast member Pedro Pascal.

Brie and Katy Perry clowned around—the thespian laughingly showed off her best actress-drama Golden Globe, while the singer pretended to eat away her envy by chomping into an In-N-Out burger. What, burgers amid the fancy meal? Katy ordered California’s famous burgers delivered to her table, which included Cecil B. DeMille award recipient Denzel Washington and his family. 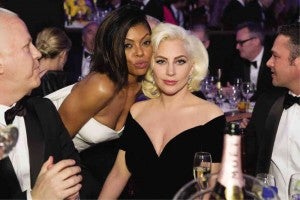 Melissa McCarthy and Amy Schumer, who both vied for best actress-comedy or musical honors, were among those who stood up during the breaks and posed for pictures.

Leonardo’s acceptance speech was the most moving and eloquent, and the actor’s pitch for the environment resonated especially with Boboi, who advocates ecotourism.

Meanwhile, backstage, several of the actress winners kissed their brand-new Golden Globe trophies for the photographers. These included Lady Gaga, Kate Winslet, Taraji P. Henson and Rachel Bloom who announced that Lea Salonga will guest in the season finale of the musical-comedy series for which she won, “Crazy Ex-Girlfriend.”

After “The Revenant” was announced as the best film-drama, the six parties hosted by InStyle/Warner Bros., Fox, NBC/Universal/Focus Features, Weinstein Company/Netflix, HBO and Amazon Studios immediately began, all in the hotel premises.

The party by Fox, which was the night’s biggest winner with six awards, was the hottest, especially because Leonardo and Lady Gaga were big draws. The two stars held court on opposite sides and attracted a constant stream of well-wishers.

Senedy posed with Christian Slater and his best supporting actor in series or TV movie Golden Globe at the InStyle/Warner Bros. bash, where lovely Fil-Am actress Vanessa Hudgens stunned partygoers in a black and silver gown.

NBC/Universal/Focus and HBO transformed a top parking floor and poolside area, respectively, into elaborate party venues, complete with fountains. HBO’s dancefloor was the best, attracting a huge crowd of animated revelers who grooved until 1 a.m. on a floor set up over the pool.

Fittingly, “AHS: Hotel” costars Lady Gaga and Denis sat down together in a couch and rested their high-heeled feet after a long but triumphant day.