Natalie Cole remembered with mix of music and laughter 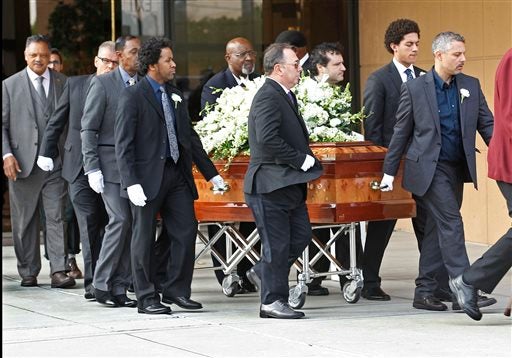 LOS ANGELES— Natalie Cole was remembered as a loyal friend, “the best and bossiest big sister,” and a worthy successor to her famous father’s legacy in a joyous and music-filled funeral highlighting her Baptist faith on Monday.

The two-hour, 50-minute service at West Angeles Church of God in Christ was filled with affection for the daughter of crooner Nat King Cole who carved out her own Grammy Award-winning legacy during a 40-year career.

Known for effortlessly crossing R&B, pop and jazz genres with such hits as “This Will Be (An Everlasting Love),” ”Inseparable,” and “Our Love,” she died New Year’s Eve at age 65 of pulmonary arterial hypertension, which led to heart failure.

READ: Natalie Cole, master of past and present styles

“My sister was a warrior in the best sense of the word,” Casey Cole Hooker said. “In the end her body simply began to give out and it shut down. She was long accepting of what was coming and trying to make us OK.”

Among the several hundred mourners were singers Chaka Khan, Gladys Knight, Lionel Richie, Smokey Robinson and Stevie Wonder, along with Cole’s frequent producer David Foster, actress Angela Bassett and the Rev. Jesse Jackson, who did not speak. Khan had been expected to sing, but didn’t because of illness.

Wonder played harmonica and sang “The Lord’s Prayer,” getting the crowd on its feet and cheering at the end.

“We must continue the spirit and kindness that this woman gave the world,” Wonder said, glancing down at Cole’s closed casket bedecked with a large spray of her favorite white roses. “She left this country where people are so divided. We speak of love but we don’t do love. We’ve got a lot of work to do Natalie, and we will do it in the spirit of you.”

Richie recalled the extra pressure Cole faced trying to make it in the entertainment industry as the daughter of a legendary singer.

“She conquered and stepped up and rose above it all,” he said. “I will always remember her laughter, her humor, her silliness, that voice and more importantly her friendship. There were many moments she was down and she picked me up.”

Foster collaborated with Cole when she intertwined her voice with that of her father to make his “Unforgettable” a multi-Grammy-winning hit through technological wizardry in 1991.

“She was the most un-star like superstar you could ever know,” he said. “She always had a sympathetic ear and words of wisdom, which she learned from her own eventful life.”

Cole was frank about the fierce drug addiction that gripped her for several years until she went to rehab and overcame it in the 1980s. She was later diagnosed with hepatitis C, which she attributed to her addiction, and had a kidney transplant in 2009. Those issues contributed to her health woes in recent years even as she maintained a busy performing schedule.

“Fame is a beast,” Foster said. “For Natalie, in the early years it did not serve her well, but in the last 25 years fame became very matter of fact. She didn’t use it, abuse it and she didn’t give a crap about it. Even when she was struggling with her own health, she maintained her own dignity, class and optimism.”

Cole Augustus said her sister answered to the nickname “Sweetie” among family. Cole Hooker smiled while recalling Cole as “always the best and bossiest big sister.”

The twin sisters contributed background vocals to a song on Cole’s last album done in Spanish in 2013. She urged her siblings to “watch their pitch” before the session began.

“That was the end of our recording career,” Cole Augustus said.

Yancy, whose late father Marvin was the first of Cole’s three husbands, is a drummer who played in his mother’s touring band. He carried her thick Bible to the podium. They shared a strong faith and were regular churchgoers.

“What a woman,” he said. “She taught me how to love. She had my back every time when I needed it. The greatest gift she ever gave me was Jesus. I cannot wait until that day that I see you again.”

Cole Hooker said her older sister wanted her epitaph to be: “The daughter of a king, the mother of a prince and a friend to all.”

Cole was later buried privately at Forest Lawn Memorial Park in Glendale, near her father, her mother Maria, and adopted siblings Carole and Nat Kelly Cole.