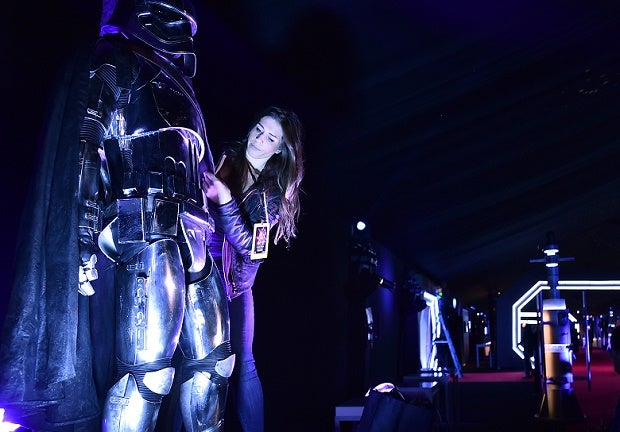 A staff member prepares a Darth Vader mannequin at the world premiere of “Star Wars: The Force Awakens” at the TCL Chinese Theater on Dec. 14, 2015, in Los Angeles. AP

The company said the seventh installment of the “Star Wars” saga made an estimated $145.9 million over the weekend, including $53 million in China.

It dominated the North American box office for a fourth consecutive weekend, becoming that market’s top grossing film of all time with $812 million in cumulative sales.

“China led the way as the final international market to open with an estimated two-day weekend (total) of $53M, making it the highest Sat/Sun opening of all-time there as well as the biggest industry opening Saturday of all-time,” a statement from Disney said.

Disney said the China numbers put the film’s global total over $1.73 billion, behind only “Avatar” ($2.79 billion) and “Titanic” ($2.19 billion), both by filmmaker James Cameron.

“Jurassic World” had previously been number three, with $1.67 billion in total box office receipts, but it fell to the Star Wars onslaught.

Disney noted that “The Force Awakens” also was in record territory in key European markets — the highest grossing film ever in the UK, and number three within Europe.

READ: The Ultimate Immersion Guide To The Star Wars Universe

Even before the week was out, it had overtaken “Avatar,” a sci-fi epic that has sold $760.5 million in the North American market since its 2009 release, as the top-grossing film of all times there.

Such was the movie’s hold on American movie-goers that it overshadowed what otherwise would have been a phenomenal North American performance for “The Revenant.”

Oscar-winning director Alejandro Gonzalez Inarritu’s dark tale of survival in the American frontier, starring Leonardo DiCaprio, took in $38 million over the weekend, lifting it to second place in the North American rankings.

This was the third week “The Revenant” has been in North American movie theaters, but only its first week in wide release.

Third place went to “Daddy’s Home,” a sharp-edged comedy about the uncomfortable competition between a stepfather, played by Will Ferrell, and the biological father, Mark Wahlberg.

Also in its third week in theaters, it made $15 million.

Number four was “The Forest,” a low-budget horror film starring Natalie Dormer and Taylor Kinney, which made just over $13 million its first weekend in theaters, industry tracker Exhibitor Relations estimates.

Fifth on the list was “Sisters,” with Amy Poehler and Tina Fey, at $7.2 million its fourth week out. It has made nearly $62 million so far.