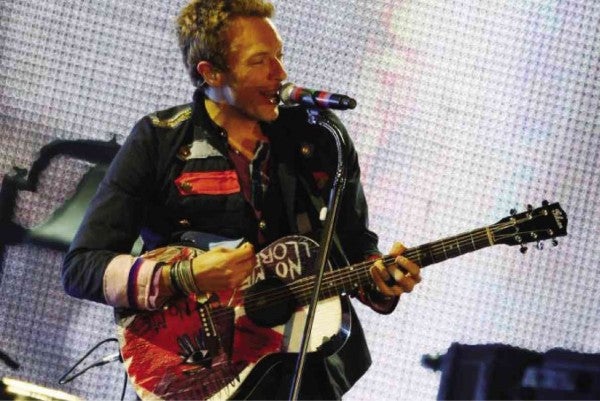 After the disarming melancholia of the musical confessional, “Ghost Stories,” Coldplay returns with its smashing seventh album, “A Head Full of Dreams” (No. 2 on the Billboard 200 this week), which sees frontman Chris Martin coming to terms with middle-age issues and the end of his relationship with ex-wife Gwyneth Paltrow.

Instead of whining about his problems, Martin chooses to embrace the blissful sparkle as much as the soul-stirring sorrow that resulted from his and Gwyneth’s serendipitous “conscious uncoupling”—with irresistible dance music!

The mood is upbeat and optimistic, as Chris and the band get some formidable friends, like Beyoncé (“Hymn for the Weekend”) and Tove Lo (“Fun”), to celebrate his “emancipation” from his romantic woes.

You’ll have a hard time resisting the title track’s vim and vigor, the toe-tapping groove of the metaphor-heavy “Birds,” the disco-garnished glitz of “Adventure of a Lifetime,” the electronic swagger of “Army of One,” the midtempo patter of “Amazing Day” and the jaunty hooks of the power ballad, “Up & Up,” described by Martin as “a song we’ve been wanting to write for 15 years!”

Chris says he couldn’t have done it without his pals, as he discloses in “Hymn for the Weekend,” his lilting collaboration with Queen B, who temporarily steals the show in the track’s intro, before Chris launches into a groovesome tribute to the people who kept him sane after the breakup.

These days, Martin can even discuss the good times he shared with his lovely ex—as he does in “Fun”: “Didn’t we have fun/ Don’t say it was all a waste/ We said forever always/ We could have been lost/ We would have been saved!”

It’s no surprise that Martin is most compelling in the bittersweet ballad, “Everglow,” where he sings about estrangement, marital discord and love that lingers forever—with Paltrow herself on the backing vocals (!): “So, how come things move on/ When it feels like the end of my world/ When I should—but can’t—let you go?”