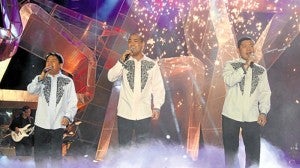 Licinio Lolo, 44, Andrew Sanchez, 40, and Bonifacio Salubre, 38, a.k.a. The Maasinhon Trio, said they first felt awkward going up against younger opponents in ABS-CBN’s “Pilipinas Got Talent 3.”

In the end, faith in their talents carried them through. “We’ve been singing together for 18 years. Kampante kami sa sarili at experience namin,” Lolo told the Inquirer on Sunday night after the “PGT3” winner’s night at the Ynares Sports Complex in Antipolo, Rizal.

Sanchez and Salubre fell on their knees and Lolo buried his face in his hands in shock when judges Kris Aquino, Ai Ai de las Alas and Freddie Garcia declared the trio as champions. Offstage, they were met with hugs and kisses from their tearful wives and children.

Not a few compared the trio to the Apo Hiking Society. “We get that often,” Lolo said, “and we’re honored.”

The Maasin, Southern Leyte, natives—all very pious church choir members—have joined past competitions, such as the Bohol Pop Music Festival 15 years ago, where they won 3rd place. But with the P2 million cash prize, last Sunday’s victory was undoubtedly their biggest ever. “We’re donating part of the prize to our church,” Lolo said.

They sing in weddings, birthdays and other occasions, but they have day jobs. Lolo works with the provincial government, Sanchez is a warehouse chief in the Southern Leyte Electric Cooperative and Salubre is a fire officer.

Asked if they were willing to leave their jobs and relocate to Manila to pursue their music career, the three were unsure. “We’ll have to think about that carefully,” Lolo said.

For the past three years, “PGT” winners had been singing acts, and all male at that: Jovit Baldivino took season 1; Marcelito Pomoy, season 2. Also, more than half of the finalists (20 of 38) were either vocalists or musical groups.

This season had eight, including runners-up Bringas Brothers (acoustic duo) and 15-year-old heartthrob and crowd favorite Khalil Ramos, who brought home P100,000 each.

On social networking sites like Twitter, predictions had favored the aerial acrobats Synergy and shadow theater group El Gamma Penumbra. In the end, as the judges repeatedly stressed, it was the text votes that counted.

Read Next
Veteran actress too scary for close-ups
EDITORS' PICK
Duterte expected to make announcements on quarantine measures Thursday
Leveling up your ‘lutong bahay’ with the kitchen companion you never knew you needed
Public school enrollment to proceed on June 1 – Palace
Año: IATF recommends GCQ for Metro Manila with localized lockdowns on June 1
Notice of 2020 regular meeting of stockholders June 18, 2020
SM prepares for ‘safe malling’
MOST READ
Metro Manila mayors told: Keeping bus, jeepney ban ‘catastrophic’
Revillame tells Roque: ABS-CBN is in my heart despite being in rival network
DepEd: No need to buy gadgets for alternative learning
Jeepneys banned, buses allowed to operate at 50% capacity in GCQ areas — IATF
Don't miss out on the latest news and information.