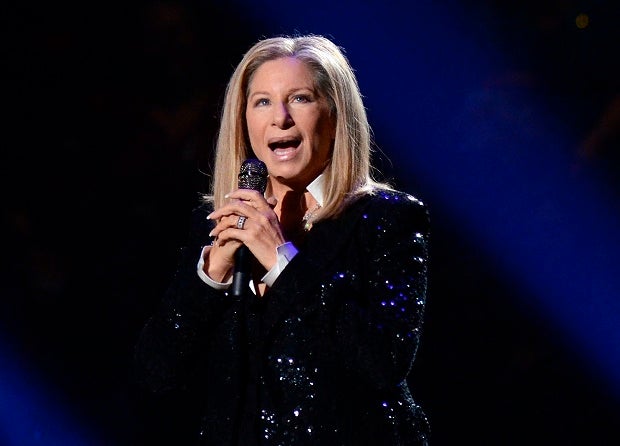 LOS ANGELES, United States—Barbra Streisand was the guest of honor at the annual Women in Entertainment breakfast Wednesday, but it was Hollywood publicist Nanci Ryder and film executive Jeffrey Katzenberg who moved the audience the most.

Ryder, who was diagnosed with Lou Gehrig’s disease last year, appeared with Katzenberg at the industry event. Because she can no longer speak, he read a statement she had written, and as he did, Ryder wailed and dabbed her eyes with Kleenex. By the time he finished the statement, he was crying, too, as were most of the guests at Milk Studios, where the breakfast was held.

“I aspire to be half the person you are,” Katzenberg told Ryder through tears.

In her statement, Ryder urged the entertainment powerhouses at the Hollywood Reporter’s annual Power 100 breakfast to work together to create gender equity in the industry.

“I wish my disease were as easy to fix as this,” she wrote.

Beyond its annual Power 100 list of the most influential women in Hollywood, the Hollywood Reporter’s Women in Entertainment initiative includes a mentorship program, which pairs girls in underserved areas of Los Angeles with female Hollywood executives for a year of mentoring.

Singer Meghan Trainor announced at Wednesday’s breakfast that three of those girls would receive full academic scholarships to Loyola Marymount University, inspiring another round of tears in the room.

“I never thought I would get to go to college,” one honoree said through sobs.

The audience was cried out by the time Streisand took the stage to accept the Sherry Lansing Leadership Award, saying she’s angry that women are still so underrepresented in Hollywood, politics and medical research.

“Gender discrimination drives me crazy,” Streisand said. “Women are still treated as second-class citizens in the workplace and equal representation in Congress.”

One area where women outpace men is in death from heart disease, she said. Streisand endowed her namesake Women’s Heart Center at Cedars-Sinai in 2012 to conduct research and develop treatments specifically for women’s cardiac conditions.

“In the last 55 years, almost all research has been done on men,” she said. “Gender inequality even extends to mice in the labs: They’re all male! So even female mice are discriminated against.”

Like Ryder, Streisand encouraged the powerful people in the room, including the young women receiving college scholarships, to unite and speak up for gender equality.

“Our instinct for love and compassion is something that this world, this chaotic world, needs more than ever,” Streisand said. “Speak up until women are treated equally by the people who pay us, by the people who heal us, and by the people who claim to represent us. And remember the more we support each other, the stronger we become.”

Spielberg, Streisand to get Presidential Medal of Freedom

Barbra Streisand, the feminist, sings on