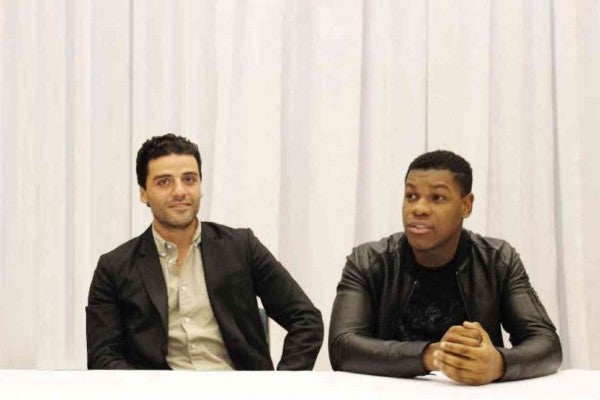 LOS ANGELES—“In the box was R2D2 and hearing Anthony Daniels speak like C3P0 for the first time…,” Oscar Isaac recalled a moment during the first cast read-through of “Star Wars: The Force Awakens” as the most memorable highlight of his experience making the seventh installment of the space opera film series.

The actors chatted with us in a cavernous room at the humongous LA Convention Center—an apt setting for their epic film.

Excerpts from our interview.

Gwendoline Christie (Captain Phasma): For me, it was my first day, because there wasn’t an exact defining moment. I didn’t get that kind of iconic moment of the phone call that says, “You’ve got the part!” It was, “They want you for this.” Once I’d scooped myself up off the floor, we had to work it out with the filming of “Game of Thrones” and “Star Wars.”

Both worked together very generously to allow this opportunity to occur. But that was a process over some weeks, so I didn’t want to get too disappointed that maybe this amazing opportunity wouldn’t happen. Then, on my first day on the set, it seemed like it was going to work but it still wasn’t totally.

I was over-excited the minute I got in the car. Then, once I put the costume on and I walked onto the set, I looked at what was around me. I was introduced to some other members of the cast. It was a wonderfully, magically childlike moment!

There are so many fans of the films. We’ve watched those movies, and our imaginations have gone into overdrive as a result of watching them. We’ve imagined ourselves in those situations and the almost undreamt of possibility that you might one day be allowed to be in that world in some form.

It does sound clichéd, but it’s true —achieving that seemingly impossible dream, that magical moment of walking onto the set and being in a “Star Wars” world was gloriously euphoric for me.

Lupita Nyong’o (Maz Kanata): I was in a daze on the first few days of being on “Star Wars.” That was a whole other world of trying to figure out what on earth was going on. I was on the set. When I looked around, it was the ‘hugest’ set I’ve ever been on. Everyone had a role to play, and I was one piece of that puzzle.

It was like my mind exploded for a moment. I couldn’t take it all in. I just realized what a dream it was to be walking, treading in a different world. It was a different world all around me.

The art direction in this film is incredible! Every texture feels otherworldly. Everything you see, like the color, everything feels like it’s true to that world. To be allowed to be a part of that was truly incredible. I definitely had a moment of like, “Oh my God, this is real (laughs)!” This is really happening to me right now! I don’t want to wake up (laughs). 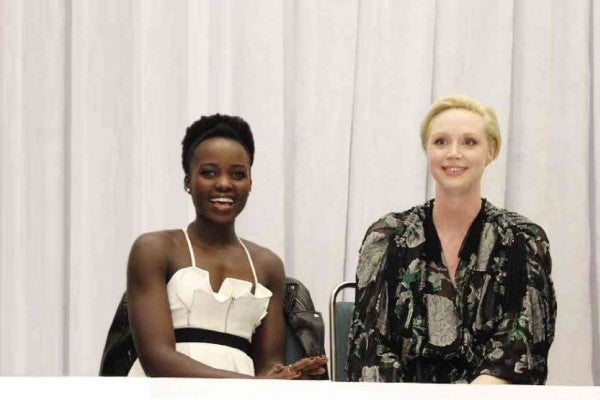 Adam Driver (Kylo Ren): There are so many—it’s hard to pick one. I feel maybe the first time I got a call from JJ about the whole thing. Then, it was six months of trying to figure out schedules and thinking about it. Because there was no script to read, you’re  basing a judgment on JJ and what he wanted to do with that character and him walking me through it. That all seemed exciting.

For me, that was a moment I’ll never forget—walking in and being surrounded by drawings and sketches of everyone’s characters and reminding myself, oh right, this is “Star Wars.” I forgot that I was in the midst of this world!

Daisy Ridley (Rey): Probably wrapping up, because everything—from when I started auditioning two years ago to now—has been like a roller coaster. Not an hour has gone past where I haven’t thought about this film and this character. And just the amount of work from thousands of people, the crew especially… obviously, we’re just a face of all of this work that’s gone on behind the scenes.

When we were finishing, I was just so emotional. You build such amazing relationships. I’d never been able to build a relationship like that on a set, because I’d never been on a set that long. To be cared for and for people to appreciate you for that, to all come together and to know it was finishing was overwhelming emotionally. Because firstly, I didn’t want to finish and secondly, to me, it was more than filming a movie.

Obviously, that journey’s not over, because the film hasn’t come out yet. But just to look around the set and have everyone there and say goodbye was a big moment.

Carrie Fisher (Leia): When I first got there, I was in my trailer and I heard Harrison’s footsteps. I still know that sound. Then, he just came and said, without enthusiasm, “Is Carrie here?” So that was very special (laughs). It was like being on campus again.

Harrison Ford (Han Solo): I don’t want to give anything away. The iconic moment will be what the audience chooses to make iconic, what connects with them. And we will see what people feel.

Oscar Isaac (Poe Dameron): For me, it was the first read-through when we went to Pinewood. Everyone was sitting around in a circle. There was that iconic black and white photo that was taken.

In the box was R2D2 and hearing Anthony Daniels speak like C3P0 for the first time—you could feel the gravity of it! That moment was very moving.

John Boyega (Finn): Being cast in the film was definitely special because it was after seven months of audition, training and chemistry reads. After I booked the part was when I really felt like I was going to be part of a bigger world.