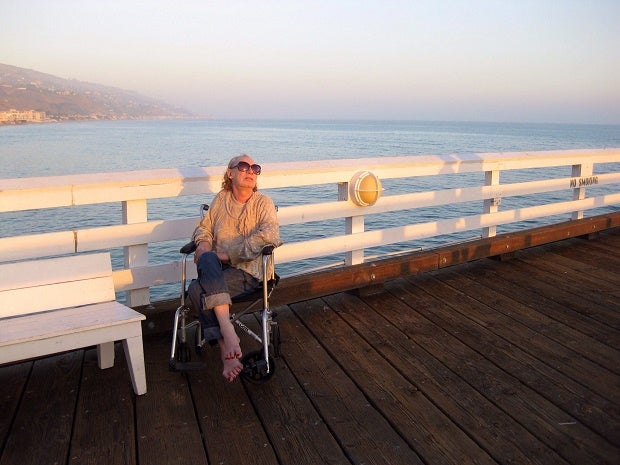 In this 2012 photo provided by David Chick, actress Holly Woodlawn sits on Fisherman’s Pier in Malibu, Calif. Woodlawn, who starred in the 1970 Paul Morrissey film “Trash” and was immortalized in the first few lines of Lou Reed’s “Walk on the Wild Side,” died Sunday, Dec. 6, 2015, in Los Angeles after a battle with cancer. She was 69. David Chick via AP

LOS ANGELES, United States—Holly Woodlawn, a transgender actress of the 1970s who was Andy Warhol’s muse and inspired Lou Reed’s “Walk on the Wild Side,” died on Sunday in Los Angeles following a battle with cancer. She was 69.

US media said Woodlawn, who recently appeared in two episodes of Amazon’s dark transgender comedy “Transparent,” had suffered from alcohol and substance abuse for years.

Born Haroldo Danhakl in Puerto Rico, she changed her name to Holly Woodlawn after meeting Warhol and appeared in two of the artist’s films—”Trash” and “Women in Revolt.”

Joe Dallesandro, who starred alongside Woodlawn in “Trash,” said he was with her when she died.

“I know Holly knew I was with her today because she always loved the fragrance I wear Chanel Antaeus.”

Woodlawn will be remembered for inspiring the lyrics to Reed’s 1972 track “Walk on the Wild Side,” written after she left her home in Miami at age 16 and hitchhiked to New York.

“Holly came from Miami, F.L.A.; hitchhiked her way across the USA; plucked her eyebrows on the way; shaved her legs and then he was a she. She says, ‘Hey babe, take a walk on the wild side,'” the song goes.

Andy Warhol beyond his 15 minutes