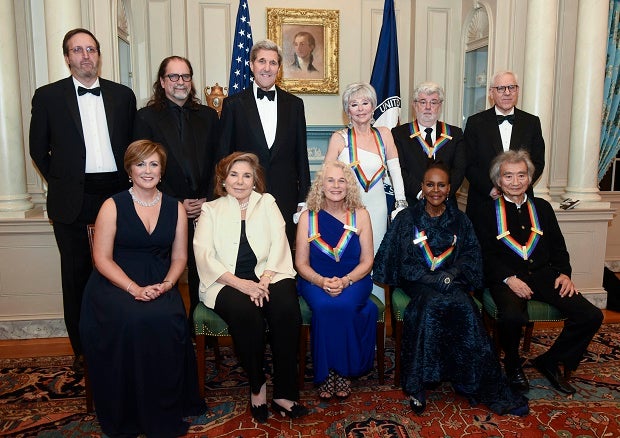 WASHINGTON — Less than two weeks before the release of the new “Star Wars” movie, George Lucas is about to receive the nation’s highest award for achievement in the arts.

The accomplishments of Lucas and four others were being celebrated at the Kennedy Center Honors on Sunday night, with President Barack Obama and first lady Michelle Obama in attendance. The president was expected to arrive late after delivering a national address.

Lucas created the “Star Wars” and “Indiana Jones” movie franchises, ushering in the age of the Hollywood blockbuster, and he broke barriers with his use of special effects and sound.

During a ceremony for the honorees late Sunday afternoon at the White House, Obama said Lucas created films with “timeless themes and cutting-edge technology.”

“Without him, movies would not look as good or sound as good as they do today,” Obama said.

“Star Wars: The Force Awakens,” the seventh movie in the franchise and the first made without Lucas’ involvement as director, producer or writer, opens Dec. 18 and is expected to be one of the highest-grossing films in history.

READ: ‘Star Wars,’ the space epic no one believed in | Star Wars director says he aimed for ‘delightful’ movie

Moreno, a native of Puerto Rico who started dancing at age 9, became the first Latina to win an Academy Award when she was honored for her performance as Anita in “West Side Story.” She’s one of a handful of artists to win an Oscar, Emmy, Grammy and Tony, and Obama said she pushed back against Hollywood typecasting.

“She’s still a leading lady of her era, a trailblazer with courage to break through barriers and forge new paths,” Obama said.

Tyson, a longtime star of stage and screen, has said the honor validated her decision to turn down many roles as she tried to find meaningful work as a black woman. At age 90, she’s currently starring on Broadway alongside James Earl Jones in “The Gin Game.”

Ozawa, who was born in China to Japanese parents, began conducting as a teenager in Japan after World War II. He went on to lead the Boston Symphony Orchestra for 29 years.

King was inducted into the Songwriters’ Hall of Fame nearly 30 years ago for her broad influence on pop music, which helped shape the sounds of the 1960s and 70s. Her compositions include “The Loco-Motion,” ”One Fine Day” and “I’m into Something Good.”

Obama said King’s first solo album, “Tapestry,” was one of the first albums he ever bought; it’s also one of the highest-selling albums of any genre.

“In the world of American music, Carole is royalty,” Obama said.

This marks the 38th year of the Kennedy Center Honors, and the event has new producers for the first time. Stephen Colbert of CBS’ “The Late Show” is hosting the gala for the second consecutive year. It will be broadcast Dec. 29 on CBS.