“Both of us are misunderstood,” said young actress Julia Barretto on why she could relate to Trixie, her character in the  drama series, “And I Love You So.”

“People don’t understand why Trixie and I are the way we are. When it comes to facing problems, we always stand strong. We stick to what we believe in,” said the 19-year-old actress.

Of late, Julia is the subject of tabloid news stories romantically linking her to James Reid, as well as for her decision to drop the surname of her dad, Dennis Padilla (Dennis Baldivia in real life).

“I like my role. It’s important that viewers understand where she (Trixie) is coming from,” Julia explained. “Just like me, she fights for what she believes in. She knows when enough is enough. She’s a strong person, but there are also moments when she breaks down.”

The series revolves around the lives of Trixie (Julia) and Joanna (Miles Ocampo), who consider each other bitter rivals in school and in love—they fall for the same guy, Justin (Iñigo Pascual). Their rivalry intensifies and becomes more complicated when they are forced to live under one roof as stepsisters. 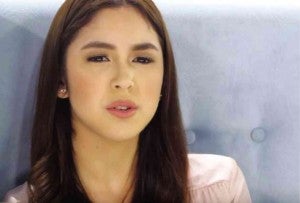 For her part, Miles said she had to adjust when playing Joanna. “It was a difficult first few weeks for me. I’m thankful that our directors and staff are very supportive. I easily relate to Joanna because she has learned to fight back when she feels that she’s right. She’s friendly, optimistic and is generally a happy person. She doesn’t care much about what other people say  as long as the people she cares for aren’t affected.”

“And I Love You So” is Miles’ biggest project so far. “I’m lucky that I get to work with talented actors. They are supportive and giving. I’m learning a lot!”

Also in the cast are Dimples Romana as her mother, Michelle; Angel Aquino as Trixie’s mom, Katrina, and Tonton Gutierrez as their father, Alfonso.

Julia said playing a mean girl in the series is a challenge. “Trixie feels envious of Joanna, since all she wants to do is please her dad. Now, his attention is divided, because Joanna and her mom are around,” Julia explained. “Trixie becomes an angry person because she wants all of her dad’s love and affection for herself.”

She added: “I learn from other actors by watching how they treat their  scenes. To get into character, I also ask myself: What’s it like to be mean? How is Julia  when she’s angry or jealous? I put those emotions into my character. It just comes from the heart!” 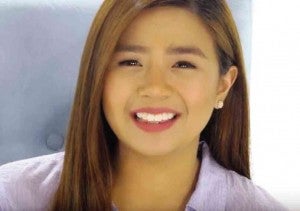 In teasers, Julia is shown deliberately hitting Miles with a volleyball during an interschool match. “We can’t discuss other scenes, but  there’s more to just throwing a ball at Joanna,” said Julia. “How I abuse her verbally is more painful than what she feels when I hit her.”

In real life, Miles said she and Julia are good friends. “I’ve known her for a long time because I was able to work with her mom, Tita Marjorie, in a previous project. We would always say ‘hello’ to each other. What’s surprising was how fast we became friends when the show started!”

Julia added: “We’ve gotten so close that it’s always hard for us to stop laughing on the set—although we don’t talk when we have to shoot sensitive sequences. Trixie will soon provoke Joanna. Let’s see how she will stand up and defend herself.”