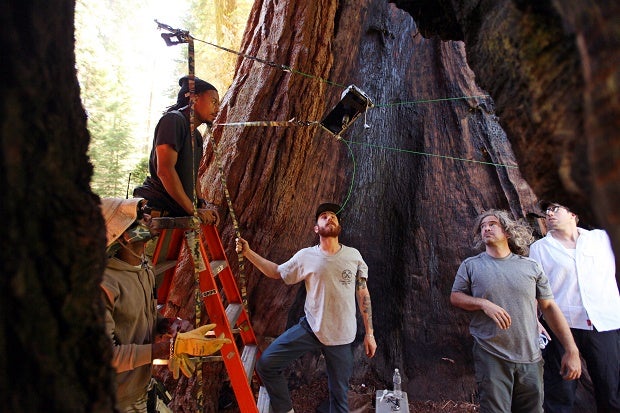 LOS ANGELES — While experimenting with virtual reality for his latest project, “The Walking Dead” executive producer David Alpert and his crew relied on a very old-school form of technology when filming in 360 degrees: the hidey-hole.

“The assistant director would go around and say, ‘OK. Everyone, get in your hidey-hole!'” said David Alpert, president of Skybound Entertainment and an executive producer on “The Walking Dead” franchise. “Everyone in the camera department would look around and check if you could see them. If they could, they’d say, ‘You need a new hidey-hole!'”

READ: Was that Glenn on the radio?

Being outside the view of cameras capturing every angle was just one of the many challenges that Alpert uncovered while working on “Gone,” a live-action episodic VR series produced for Samsung’s Milk VR service. The first installment of the 11-part mystery debuts Dec. 9.

“Gone” explores what happens when a child goes missing. The story unfolds from a main 360-degree perspective. At certain points throughout “Gone,” viewers are able to zoom in on clues using the touchpad on the side of Samsung’s Gear VR headset, which utilizes Samsung smartphones as a display device.

“The Walking Dead” fans will have to wait for a VR experience based on the franchise. Alpert noted that modern VR is still evolving and that he wanted to first produce an original story in VR before tackling zombies in the immersive medium.

“In the beginning when TV came out, people started just by putting radio on TV,” he said. “Then, when the Internet came, people said, ‘Let’s put TV on the Internet.’ It takes a while to find that native medium. I don’t think the best thing to do is to to take an established brand and just plop it in VR.”