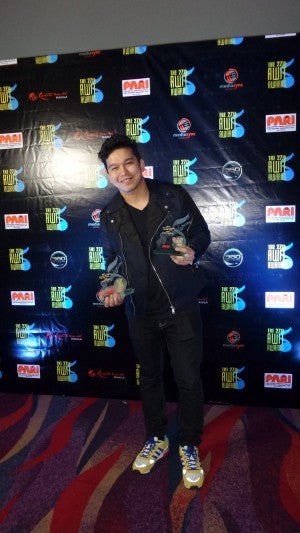 Low-profile, behind-the-scene geniuses often find themselves in the shadow of their illustrious work.

That he scored two consecutive “Best Selling Album” plums from Awit Awards as producer makes him an industry dark horse.

As proven, Rox has the skill and passion to deliver the goods, guiding heartthrob Daniel Padilla to the top of the charts and record sales race through his work for the latter’s self-titled debut and 2014’s “DJP.” This year’s “I Heart You” also became a highly touted candidate for “Best Selling” nod.

“I am in love with the art of creating records, writing songs, and bringing out the best in the artists I’m working with,” shares Rox who came on board in 2007 and fast-became a prolific record producer and songsmith from the talent-laden group ABS-CBN Creatives.

As songwriter, he co-wrote the phenomenal hit “Boom Panes” by comedian Vice Ganda, as well as the latter’s “Wag Kang Pabebe.” He also penned the radio favorites “Ngayong Alam Ko Na” by Liezel Garcia and “Now We’re Together” by Bailey May of Pinoy Big Brother fame.

The lists of musical artists he has handled and original songs he contributed for them to sing are proof of his strong grip on industry-level professionalism and pop sentimentality.

He wrote “Pag-Ibig Ko’y Ikaw” for Martin Nievera, “Only With You” for Toni Gonzaga, “Sana Ngayon Ang Kahapon” for Angeline Quinto,” “Buhay Ko’y Ikaw” for Vina Morales, “Paskong Puno Ng Kasiyahan” for Juris Fernandez, among others.

With credential and credibility empowering his every step in the control room, Rox likewise spelled his magic touch in the field of movies, soaps, and TV commercials.

He provided “Akin Ka Na Lang” for “My Illegal Wife,” “Karakaraka” for “Bromance” and the theme for “The Amazing Praybet Benjamin.”

For TV, he is behind the theme songs for “Annaliza,” “The Love Story of Kang Chi,” “Pretty Man,” “I Do” and others, having collaborated with singers Roel Manlangit, Kathryn Bernardo, Juris Fernandez and other noted voices and faces today.

Several brands have also gained more grounds because of his talent, having crafted the main theme campaign for ABS-CBN mobile (“Unlimited and Free” by Daniel Padilla), jingle for Rejoice (“Gandang Filipina, Gandang Natural”), and that for Alaska (“Change for the Better”).

Rox points out, “The key is to not stop learning and be professional all the time. You can’t put in some half-baked material and hope they become hits. You quietly produce the hits. ”

True enough, the finish products under his care are almost always assured of making the hit parade. His decorated track record shows he can churn out albums that turn into gold and even platinum.

Soundtrack and compilation albums Rox worked on mostly became Gold, too, like the “Juan Dela Cruz”, “Walang Hanggan’,” and “Be Careful With My Heart” soundtracks, as well as compilations of movie themes and past hits.

As a multi-awarded professional, Rox received a handful of Catholic Mass Media Awards, beginning with Best Inspirational Album trophy for “May Bukas Pa (Conversations of Bro and Santino)” during the Awards’ 2010 edition.

At the 7th PMPC Star Awards for Music, “Boom Panes” won Best Novelty Song of the Year, “Himig Handog P-Pop Love Songs was picked “2015 Compilation of the Year”, and “ADA The EDM Diva” had been cited “Best Dance Album.”

Boom! Rox Santos is a real deal. And there you have the records to show.