In the White House with President Frank Underwood 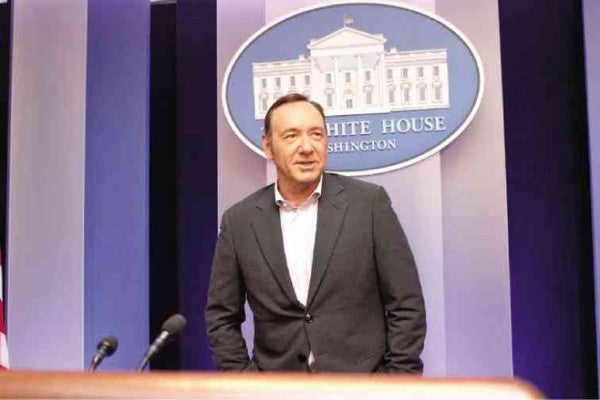 In spite of his show’s Machiavellian aspects, Kevin Spacey insists he is a political optimist. RUBEN V. NEPALES

LOS ANGELES—Who would imagine that the US president is inside this warehouse in a nondescript industrial park in Joppa, Maryland? President Frank Underwood, that is, as brilliantly played by Kevin Spacey in “House of Cards.” Kevin, smiling and obviously in a good mood this morning, plopped down in a director’s chair in the briefing room, an exact replica of the famous White House theater where the leader of the free world addresses the media and the United States.

“Our production team has done such an incredible job in recreating these rooms to such accuracy that you actually do believe you’re in them,” Kevin said of this room and other sets—including the Oval Office and Air Force One—which we toured with showrunner Beau Willimon, after the interview.

Kevin won his first Golden Globe award for his portrayal of Francis Joseph “Frank” Underwood in the political drama. From being first elected to public office as a member of the South Carolina State Senate, Frank is now the 46th and current president of the US.

In the coming fourth season, Kevin teased that Frank and his First Lady, Claire Underwood (Robin Wright), will grapple “with that kind of scrutiny and that almost inability to be able to operate in the way they had before.”

The end of last season was a huge game changer. Can you talk about where Frank is headed after three seasons?

For me, the most interesting aspect of what we explored in the third season was how this couple, two people who have operated quite brilliantly in the shadows, alleyways and the darker corners of their world, were suddenly confronted with being in the hottest spotlight that you could ever imagine, being in the presidency. Therefore, how different and challenging it was for them to grapple with that kind of scrutiny and that almost inability to be able to operate in the way they had before.

Has going to the real White House lost some of its allure since you spend so much time on the show’s White House set?

The number of events that I hosted over the years for President Bill Clinton and Hillary were always for different causes and reasons, so there’s always been a new reason to go.

No matter how many times I’ve gone (to the White House and Congress), there is something incredible about these buildings. They’re not just buildings—it’s what they represent, the people who have come through them, the history that’s been made there. They’re like some of our great monuments or places around the world. It doesn’t matter how many times you go—it’s still an extraordinary experience.

The show will air during an actual US presidential election in November next year. Will the show deal with that in any way?

When we began the show, we knew that if we got into a fourth season, it would coincide with a presidential election, but that’s as far as it goes. Ours is a fictional world, other than (real) journalists who appear on the show.

What about if Frank Underwood starts appearing as a write-in candidate in the real voter ballot?

(Laughs) There are so many things I could say to that. It’s a fact that when they held an online election in Egypt last year, I won that election.

What was your own relationship with politics before you did this show?

I stuffed envelopes when Jimmy Carter ran for president. It was the first presidential election I ever worked on. I was involved in John Anderson’s campaign when he ran for president in 1980 as an independent and Sen. Ted Kennedy’s campaign in 1980, when he joined the race. And, of course, all the work over the years with the Democratic Party and President Clinton.

Public service is incredibly important. Doing this show and as dark and Machiavellian as we have gotten has not in any way changed my view of the positive value of people getting involved.

Politics seems to be something that people are fascinated by. Maybe part of the intrigue of our show has been that we are portraying people who, despite their methods, are getting s–t done.

Robin Wright said that oftentimes you guys laugh hysterically before takes because the situations are over-the-top.

It’s true in anything that you’re doing. We’ve got scenes that allow us to have some degree of comedy. There’s certainly a lot of the direct addresses that tend to make people laugh. Because it’s Frank’s sort of letting the audience in on something they already recognize as maybe they didn’t know was going on—the duplicity of it.

We do laugh a tremendous amount of time. I love it. I’m grateful for it. It’s great to come to work with a group not only of actors but our crew as well who become our audience in such big ways. We have an incredibly good time!

You’d think that some of what happens in the show is far-fetched—but then, similar situations happen in real life.

A few weeks back, there was this moment when [Russian President Vladimir] Putin and President Obama were shaking hands. Someone put up an image of me (as Frank) and our fictional Russian president. It was almost like a mirror image of the Russian president looking at the president’s hand, like “I’m not sure I’m going to shake it.” I mentioned earlier that we don’t write story lines because of something that might be happening in the real world.

What has been bizarre and a bit strange for us is that in every single season, we’ve had the experience where we came up with a story line, written the script, put it together, read through it, shot it, then something very similar to what we just did happens in the real world.

Are you a political optimist?

I’ve always been an optimist. I love doing the complexity, intrigue and playing all the Machiavellian aspects of this particular show, but it has in no way dampened my enthusiasm about how good politics can be and how valuable public service is.

How much do you know about Frank’s journey? Have you guys talked about Frank’s last scene in the final season episode, if ever you reach that point?

Even though we may have a notion of where a story line might go, we didn’t, for example, know what the last scene in the second season was going to be until about the middle of the season. You have a road map but it isn’t a blueprint—and it changes.

There have been many examples of actors who were originally cast and we only intended those characters to exist for two episodes. But because Beau, (executive producer) David Fincher, myself and our other creative folks looked at what those actors were doing, we went, we need to expand their story lines and keep them around for a while. In some cases, they’ve been around for two seasons instead of two episodes.

One of the great things about my relationship with Beau is that, sometimes, I’ll come up with a rotten idea, but it will lead Beau to a really good idea. I’m incredibly grateful for that—something that I might think actually grows into something that turns out to be worth having.

Do you have an idea if Frank is going to be reelected?

I have no idea at this point.

But in Egypt, do you think Frank is going to be reelected?