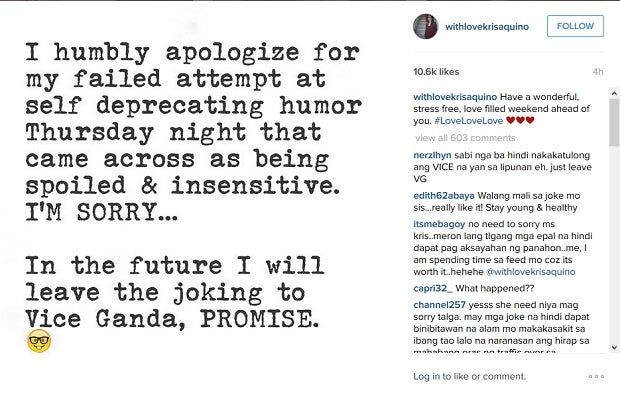 Television host-actress and presidential sister Kris Aquino has reacted to enraged netizens after drawing flak online for posting a photo of her sunburn which she acquired after touring the spouses of leaders who attended the Asia-Pacific Economic Cooperation (Apec) summit in Intramuros, Manila and calling it “quits” with inconvenienced commuters.

When Instagram user @cuppy_cake008 asked her to try walking from Cavite to Manila under the scorching heat of the sun, Aquino said she should try walking while wearing 5-inch heels on cobblestones.

(Try walking on cobblestones with 5-inch heels from 9 a.m. to 3 p.m.? Hehehe-too quick to respond??? That was why I used such hashtags… Haaayyy I will just laugh #goodvibesplease?)

(That was it? That was all you could say to those who were inconvenienced? How insensitive of you.)

Responding to criticisms, Aquino said she could give the person a sense of humor as a Christmas gift.

(If I can give you a gift of sense of humor, my Christmas gift for you, address please?)

However, in another post on Saturday morning, Aquino apologized for what she called a “failed attempt at self-deprecating humor” and insensitivity.

“I humbly apologize for my failed attempt at self-deprecating humor Thursday night that came across as being spoiled and insensitive. I’m sorry… In the future, I will leave the joking to Vice Ganda, promise,” she said.

Aquino last late Thursday night shared a photo of her post-Apec sunburn, which she said she got in touring the spouses of Apec leaders in “A Walk Through Time” in Intramuros, Manila.

(Let us call it quits with those who found it difficult to commute these past few days, the world is fair, my skin has patches on it.) YG/RAM