The Elements Music Camp: Building a homebase of talent 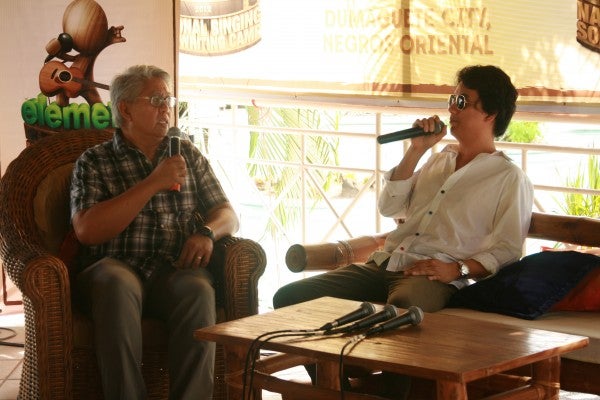 Ryan Cayabyab and Ely Buendia at the Camp. CONTRIBUTED IMAGE

This year’s Elements Music Camp is ready to unleash a new batch of talent when it opens this November.

Set for November 15-16 in Hacienda Isabella, Indang, Cavite, this will be the Camp’s sixth year of discovering and mentoring promising musical talent.

The Elements Music Camp is a project of 7101 Music Nation, an organization under the Tao Corporation community of companies. It was formed by Tao Corp.’s president, Julio D. Sy Jr., and music industry veterans Ryan Cayabyab and Twinky Lagdameo in 2010.

The aim of the Camp—which has trained some of the music business’ best and brightest in recent years—is to gather aspiring and professional singers and songwriters from all of the country and provide them with a venue to learn, collaborate, interact and create music in a natural setting.

For five days, more than two dozen respected and renowned artists and practitioners from the Philippine music industry will be on hand to mentor and guide the campers through the different activities. 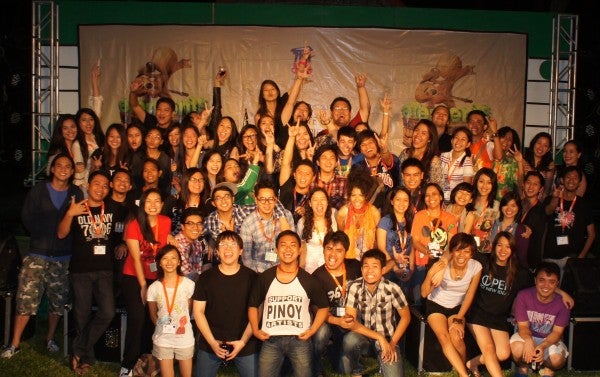 Full of fun while learning how to create music at the Elements Music Camp.

“Our topics range from OPM history to Basic Music Theory, (pointers on) how to create a song and lyrics, arranging, making a demo, recording, teamwork and collaboration, jingle writing, and a number of other topics, all related to the craft of creating songs.”

They also cover the business aspect of music, with speakers on music publishing, and licensing, artist management, social and digital media, and some inspirational talks that focus on topics like “creativity and fear.”

Among the new scheduled speakers this year will be Jonathan Serbin, head of Billboard Music Asia, who will talk about “Crossing Over: How to Break Into International Markets,” James Koo of Maker Studios, owned by Walt Disney Company, is the number one producer and distributor of online content) while Terry Waterhouse, a brand specialist from the UK, will teach about how individual artists can be brands in themselves.

“We always try to level up the content and experience for both campers and mentors to stay relevant and effective,” points out Lagdameo. 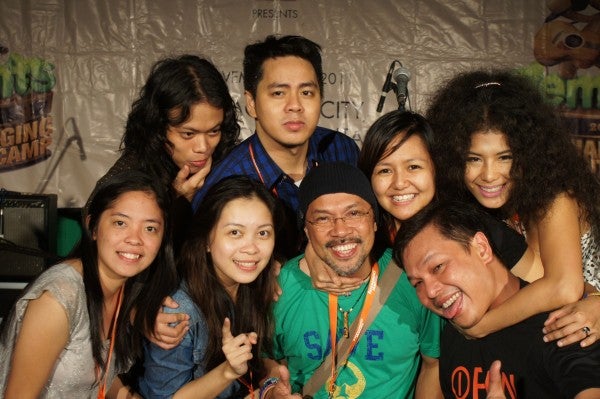 Noel Cabangon and Jett Pangan (right with tongue out) are regular mentors at the Camp.

Trina Belamide said being a camp mentor is extremely rewarding. “It’s a way of giving back to an industry that has made me so happy and fulfilled. I’ve had my share of people helping me succeed and giving me opportunities and tips, and I remember and appreciate these people. It would be great if I can do the same for this new generation and be remembered the same way.” 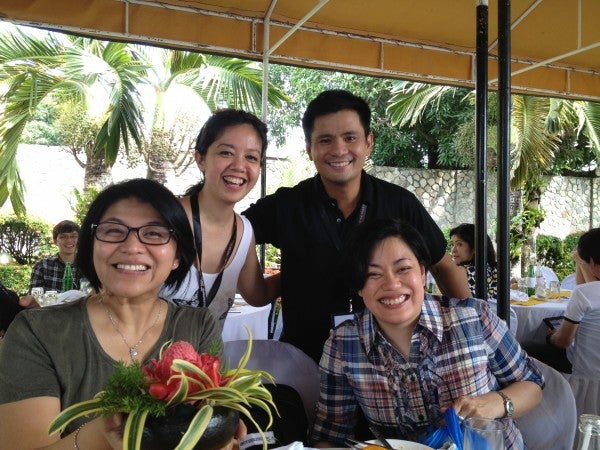 On the other hand, graduates of Elements Music Camp who have been making a name for themselves in the music industry are renowned fashion designer Kate Torralba, Cebu-based composer Jude Gitamondoc (who has written songs for Gary Valenciano, among others), Philpop finalists Ramiru Mataro, Q-York, Keiko Necesario, Lara Maigue and winners Thyro and Yumi, Davey Langit and Toto Sorioso.

Bullet Dumas and his unique songwriting style is also getting much attention nowadays in the industry.

Zsaris Mendioro, grand champion of this year’s Mossimo Music Summit, is a former camper. A few of them have been finalists of “The Voice of the Philippines:” Kai Honasan, Hans Dimayuga, Talia Reyes and Emmanuelle Vera.

They make no distinction between amateurs and professionals. 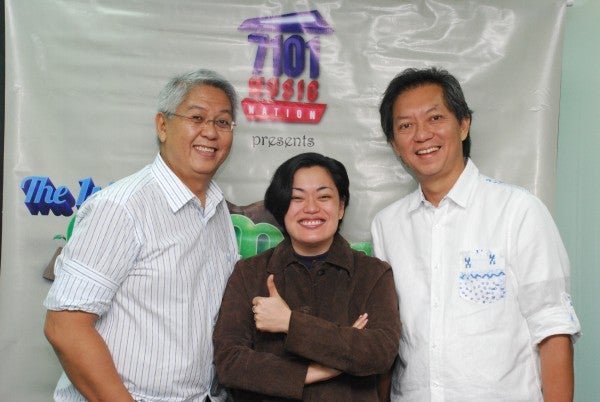 “Some established names in the industry have auditioned and joined the camp like SinoSikat’s Kat Agarrado, Nino Avenido of Greyhoundz, Paolo Valenciano, Boogie Romero of Kjwan, Sitti and Princess Velasco, to name a few,” says Lagdameo.

She adds, “Our camp alumni have moved on and thrived in so many ways, as songwriters for TV and for other artists, as individual composers and performers here and abroad, as winners of songwriting competitions like Philpop, as music teachers, as builders of music studios and music schools (in Dumaguete and Davao), to name a few. Many have released albums and Eps. Some have gone into teaching or further studies, like Jireh Calo from Batch 5, who is now at the Berklee School of Music in Boston and she is doing extremely well.”

For Ryan Cayabyab, known as the “Mad Maestro” of 7101 Music Nation and is the organization’s artistic director, the goal of the camp is simple.

A professor at the UP College of Music for two decades, he considers it an important part of nation-building to keep passing on and sharing his knowledge with the younger generation of songwriters and musicians.

To him, that is what the Camp is meant for. “ I view the Elements Music Camp as a platform for educating our songwriters, giving them enough courage to explore and create ideas that are musical or non-musical,” he says. 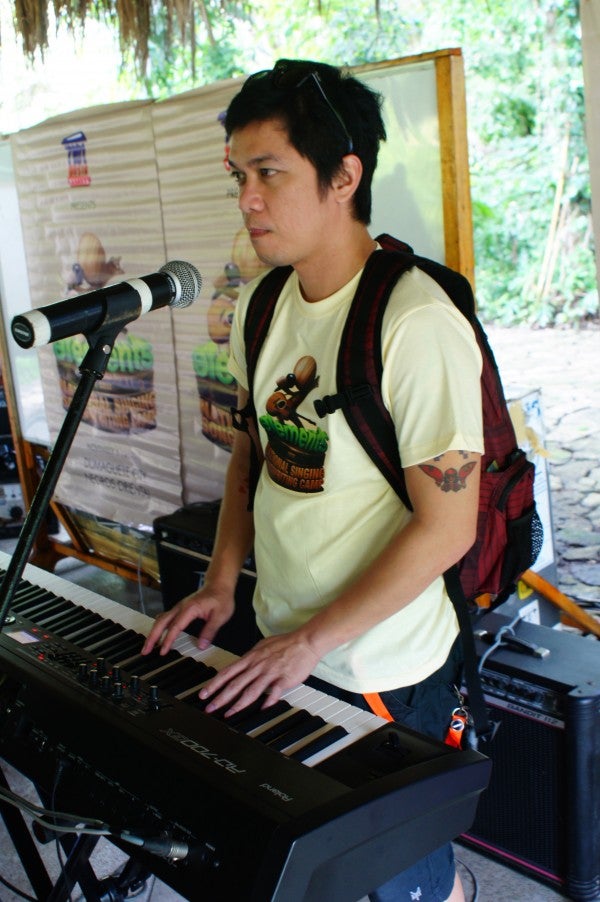 Elements Music Camp mentor Ebe Dancel agrees there is much for Elements Campers to benefit from. It gives them basic tips while sharing the experience of songwriting among fellow musicians. More important, the Camp encourages kids to keep exploring, keep learning, keep writing.

Cayabyab clarifies that the Camp is not just intended for professional songwriters, or those with previous songwriting or performing experience. Even if you’ve never been part of the Camp before, and whether you feel your talent is at par or not, you are always welcome. They are not necessarily looking for polished talent.

“Talent is most important, but I think character is also what we are looking for. We are always in the lookout for possible trailblazers, untapped geniuses or those with great musicality in the way they perform their songs.”

Lagdameo qualifies that admission to the camp is based on only two things: talent and a real willingness to create and contribute to the Philippine music industry and Philippine culture.

This was precisely the reason why she became an active participant in the Elements Music Camp.

“My personal interest in helping Ryan and Jun set up the Elements Music Camp was to help find and grow the next generation of Filipino musical talent through the mentoring and support of our respected and successful artists, to allow them to share their experiences and gifts. 7101 Music Nation was created by Ryan Cayabyab, Jun Sy and myself with a common vision and this has been studiously followed all these years,” she says.

Lagdameo sees that in the future, the Elements Music Camp will continue in its goal of discovering and mentoring new talent.

“We now will have 360 alumni nationwide after this year, an army of great singer-songwriters who are creating original material for their generation. It’s exciting to see what more they can become because they’re so talented,” she says.

Future plans include making the Camp even more responsive to the needs of promising singer-songwriters out there.

The Elements Music Camp has found the talent, discovered and nurtured it, but will not just leave it there. There are more important things yet to be done.

Building a massive talent base, like they have done with past Camps, is just the beginning.

“Our next steps now are to level up what we can do to continue their development and promotion,” she explains. “We are thinking of a number of activities to help them and their music get out, from considering setting up a music publishing service for them to building tours or festivals, or working with brands, online platforms or creative agencies. We are still planning and studying things with help from music industry key players. Nothing is set yet for now but the talent is certainly on hand.”

Sy said building a talent base in a natural offshoot of Camp—and this talent will become available to whoever needs it in whatever way.

“This just happened naturally and organically without intention. Because of the networking and camaraderie that happens during camp, the graduates organize themselves and do shows together and they collaborate for songwriting projects. Furthermore, they organize reunions among themselves. It has created a large community of Elements Music Camp artists who have a shared passion to make Philippine music flourish,” says Sy.