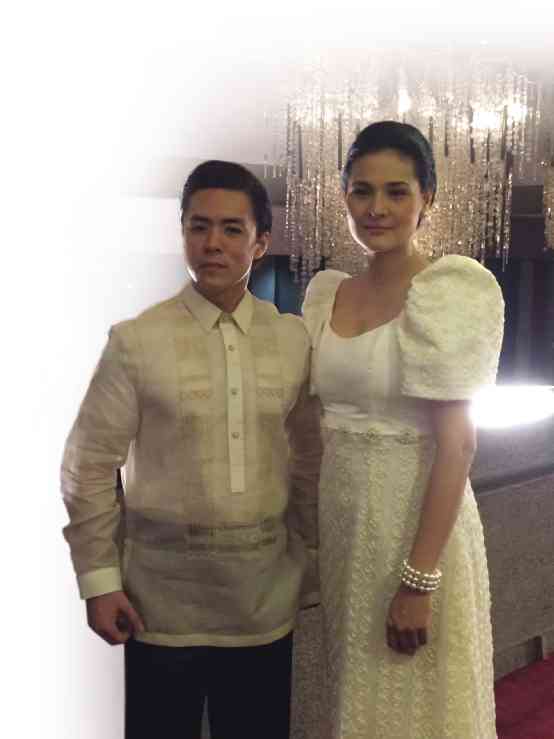 GALLARDO and Raymundo as Imelda and Ferdinand Marcos

Actress Dindi Gallardo, who is returning to show business after a 15-year absence, admits she has pretty huge shoes to fill in her latest role—that of former first lady and Ilocos Norte Rep. Imelda Marcos.

And considering La Imeldific’s magnificent obsession, those are 3,000 pairs of shoes.

“It was a great challenge because she has a unique aura and presence,” Gallardo relates. “As an actor, I did not want to just impersonate her. I wanted to capture her essence and make it my own.”

She was tapped by filmmaker Sari Dalena to play the controversial widow of president Ferdinand Marcos in “Dahling Nick,” a film on the late National Artist for Literature Nick Joaquin and an entry in this year’s Cinema One Originals fest, ongoing until Nov. 17.

In channeling the Steel Butterfly, Gallardo started with the costumes.

“Honestly, I had hoped for an authentic terno, but I understood the budget constraints,” she says. “Luckily, we were able to find a classic pair of pumps… which literally put me in Imelda’s shoes. That certainly helped in a big way.”

Beyond the extravagant connotation of the word “Imeldific,” Gallardo insists that, for her, it simply means having “confidence.”

To prepare for the part, she “read articles online and watched old video clips of Imelda’s state visits on YouTube, to study her movement and inflection.”

She concedes that she has never met the former first lady and has no vivid memories of her, growing up as a kid during the martial law era.

“But I do remember the curfews and checkpoints,” she recounts. “When martial law was declared in 1972, I was only a toddler. As a child, I was aware that Philippine culture was being revitalized, but I didn’t attribute it specifically to Imelda.”

Like any martial law baby, she owns up, “politics was not relevant—only Hello Kitty, Lego, ‘Star Wars’ and ‘Blade Runner!’ My life at the time was mostly centered around family.”

More than anything, what attracted her to the film was the chance to work with Dalena and her husband, producer/editor Keith Sicat. “The Imelda role was just a nice bonus.”

Another incentive was the fact that it was a film on a giant of Philippine arts and letters.

“Nick Joaquin is the most prolific and gifted Filipino writer in the English language,” she says. “He produced short stories, poems, essays and novels. Above all, he was a great journalist, contemporary historian and keen observer of daily life. The way he developed himself is remarkable. The script captured the life of the man.”

In the film, Joaquin is portrayed by Raymond Bagatsing; Ferdinand Marcos, by Lance Raymundo.

Digital filmmaking has vastly altered filmmaking since her salad days in the 1990s, but one thing that hasn’t changed is the camaraderie. “The long hours and the fun I [experience] from observing and chatting with interesting characters,” she quips.

Last June, she staged her official comeback, via an episode of the GMA 7 drama anthology, “Karelasyon,” directed by Adolfo Alix, Jr.

“I was excited and nervous before each take,” she recalls. “But every time I heard the word ‘action,’ I was suddenly back in the zone and felt right at home. Self-doubt will never leave me, and I have learned to embrace it because it pushes me to always do my best.”

She explains that she missed the “highs” of acting the most during her long stay in the United States. “The thrill of studying a character… acting allows me to escape reality for a moment. Sometimes, I need a vacation from myself!”

It’s a schizophrenic, time-traveling adventure. “Being an actor allows me to experience being in other people’s shoes: a nun, a lawyer, a lunatic, a virgin, a mistress, a doctor, a former first lady. Acting allows me to travel back and forth in time. No job is as exciting and colorful,” she says.