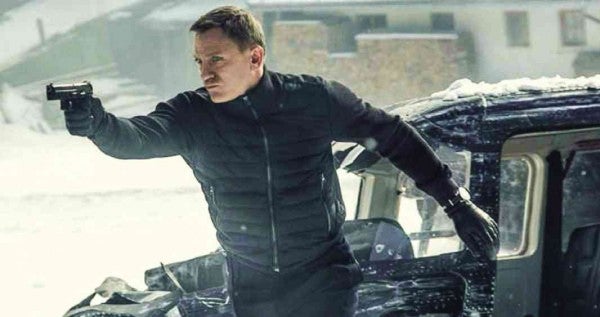 CRAIG. Amps up the action in “Spectre.”

“The dead are alive” in Daniel Craig’s fourth outing as James Bond 007. In Sam Mendes’ “Spectre,” the 24th installment of Tinseltown’s longest-running franchise, the cryptic message from beyond the grave sends the usually unperturbed British secret agent on a “rogue” do-or-die mission 18 months after the conclusion of “Skyfall”—to honor a beloved former boss’ last order!

This time, the stakes are higher, and the scores that need settling are more personal—after all, how do you ignore someone who torments you with long-buried secrets, and resents the surrogate father who took you in after your parents succumbed to a freak accident when you were merely 12 years old?

Bond trusts no one, but needs all the reliable help he can get—from quirky tech-hipster Q (Ben Whishaw), former field agent Eve Moneypenny (Naomie Harris) and their ambiguous new boss, M (Ralph Fiennes), who has his own bureaucratic battles to fight, especially after MI5 runs afoul of National Security director Max Denbigh (Andrew Scott), also known as C, who calls into question the continuing relevance of the 00 program long after the cessation of the Cold War—he even wants it shut down!

As expected, the incorrigible womanizer beds and battles his way around the globe in the company of distressed damsels who don’t always need saving—like the sassy Dr. Madeleine Swann (the luminous Lea Seydoux) and femme-fatale Italian widow Lucia Scarria, portrayed to sultry perfection by Monica Bellucci, the oldest Bond ‘girl,’ at age 50—a masterstroke in casting that cleverly subverts the stereotypical perky and seductively nubile Bond vixen.

Embracing his beleaguered hero’s license to thrill, Mendes is smart enough to know when to tease Bond aficionados with winking details that riff on the iconography of the secret agent’s time-honed and ever-expanding mythology—yes, even his Bruce Wayne-channeling past merits a revelatory revisit!

In addition, the director finds a common bond that contextualizes James’ previous “challenges”—which isn’t easy, given the spirit-crushing heartbreaks James had to endure following the deaths of his One True Love, Vesper Lynd (Eva Green), in “Casino Royale” and his confidante, M (Judi Dench), in “Skyfall.”

With fire-spewing, bomb-detonating gadgets and teeth-gnashing action sequences anchored on a story that bristles with real-world pertinence, the movie is as provocative as it is thrilling to watch, easily demonstrating that, under the stewardship of a visionary film-maker and actor-producer Craig, the screen franchise’s 53-year run is far from over!

“Spectre” is never short of surprises, and is guaranteed to leave satisfied viewers shaken—and stirred!