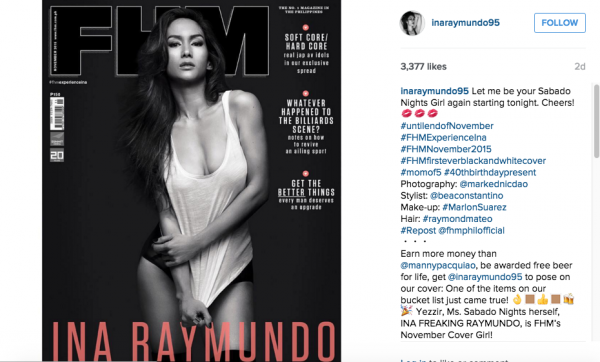 Actress and sexy mother of five Ina Raymundo has graced the cover of men’s magazine FHM for its November issue for the first time.

The cover, which features Raymundo in a black and white photograph, was shot by Mark Nicdao.

The actress told FHM that the cover was 15 years in the making.

“Okay we’ll have to go back to 2000, I had short hair then, and I had just finished…that movie. I remember shooting ko na the following day and then biglang nagkahika ako—asthmatic ako, yun ang problema,” she said.

On her Instagram account, she thanked the people behind the magazine for giving her an early gift for her 40th birthday on December 9.

“Dear FHM, Thank you all for your patience, professionalism, and being gentlemen. 15 years was a long time but you persevered. You’ve given me a very memorable 40th birthday present,” Raymundo said. AJH