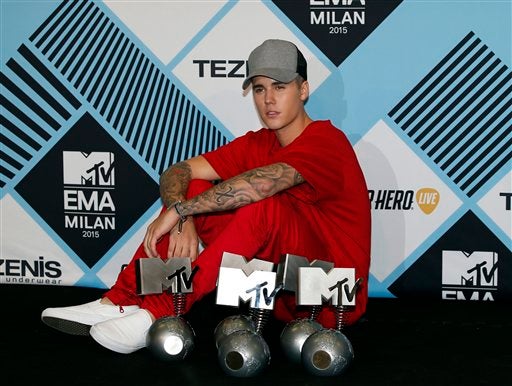 Justin Bieber pose for photographers with his awards during a photo call at the 2015 MTV European Music Awards in Milan, Italy, Sunday, Oct. 25, 2015. AP PHOTO

MILAN, Italy–Hip-hop duo Macklemore and Ryan Lewis were the surprise winners Sunday for Best Video at the MTV Europe Music Awards in a show dominated by Justin Bieber.

In a field that included superstar Taylor Swift, who had the most nominations of the night, the Seattle-based duo won for Best Video with “Downtown.”

“I had no idea we were going to win an award,” Macklemore told the gala ceremony in Milan.

“We’re not on a major label; we don’t have a big budget. What you guys give to us, we give back to you in the art we make,” Macklemore said, referring to fans.

The duo, best known for their 2012 gay equality anthem “Same Love,” shot the video for the funky track “Downtown” in Spokane, Washington, showing street life as Macklemore shops for a moped and leads a street parade.

Pop sensation Bieber, whose long-awaited album fourth album “Purpose” comes out next month, appeared in a red jumpsuit as he performed his new hit “What Do You Mean?” driven by a mellow electronic beat.

The Canadian singer took home awards for Best Male, Best Collaboration and Best Look — for which he joked, “I got these looks from my mom.”

Bieber hinted that he was happy to win attention for his music, not his legal troubles or often turbulent personal life.

“Thank you, it’s been a long couple of years. I just feel that this is pretty awesome to be recognized for my music,” Bieber said.

Best Video is determined by MTV’s editorial team, but most categories are decided through fans’ voting.

Best Song went to Taylor Swift’s “Bad Blood,” whose video — a star-studded action clip with feminist undertones — landed Video of the Year at the main US-based MTV awards in August.

R&B star Rihanna, who is also preparing to release a long-awaited album, won for Best Female and British boy band One Direction scored in the Best Pop category.

Nicki Minaj won in the hip-hop category, as she did at the main MTV Video Music Awards in Los Angeles in August.

But Minaj was again not nominated for Best Video. After she was passed over at the US awards, she accused the music industry of a blind spot towards black women, saying that her sensual “Anaconda” video was clearly influential.

Minaj accepted the latest award in a video message, saying, “I wish I was in Milan, having some delicious spaghetti, but I am not.”

Conceived as an alternative to the MTV Video Music Awards aimed at international fans, North American stars nonetheless have often dominated the European edition, whose venue changes each year.

Hoping to offer a local flavor to the evening, the show featured not only English-language pop stars but Italian tenor Andrea Bocelli, who sang the classical crossover megahit “Con Te Partiro.”

MTV Europe gave out a number of awards aimed at non-English-speaking audiences.

Diamond Platnumz, a star of bongo flava, the Tanzanian hip-hop genre that has found a growing international audience, won in a category for Africa and India.