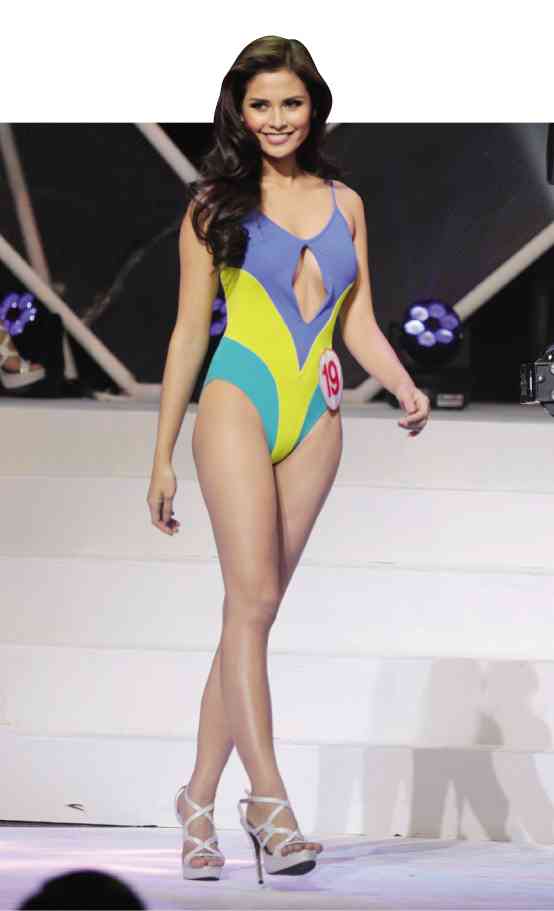 As in previous years, the most awarded aspirant bagged the Miss World Philippines crown, and earned the right to represent the country in the international arena.

Hillarie Danielle Parungao, 24, amassed the lion’s share of special awards earlier in ceremonies at The Theatre of Solaire Resorts and Casino in Pasay City on Sunday night. She received the ruby-decked crown as 2015 Miss World Philippines from her predecessor Valerie Weigmann.

Weigmann and 2013 winner Megan Young, who eventually became the Philippines’ first Miss World winner, also received almost all the special awards during their stints at the national tilt.

“I still can’t believe it—I kept shouting, ‘I have the crown!’” Parungao told the Inquirer after her proclamation.

“I did not expect it. I was just praying so hard… it was just so surreal for me to see [Megan and

Valerie] come up to me and put the crown on my head,” added the 5’6”-tall commercial model.

Aside from besting 25 other aspirants, Parungao was also proclaimed best in sports challenge and best in fashion runway. She was also hailed best in swimsuit and best in evening gown.

The haul prompted members of the audience to cheerfully quip, “Give her the crown already!”

Parungao further cemented her lead with her response in the semifinal question-and-answer round.

She was asked,  “What is the significance of being a beauty queen in this society?”

She replied to loud cheers: “As a woman, I uphold the value of compassion. And I want to be a beauty queen because I want to share compassion with others. Compassion leads to a greater society of love, hope and a brighter future for everyone.”

When asked by a judge, Fila Philippines president Cris

Albert, about the philosophy she lives by, Parungao said, “My philosophy is to always rely on compassion—because compassion can open doors to many challenges in life that we can resolve, [so] that we can progress as a society.”

Parungao’s crown came with a P1-million cash prize, which she hopes to use in chosen projects.

“I joined this pageant because I was looking for a better venue to have a voice,” she told the Inquirer. “I will use my title to strengthen my advocacy, called ‘Katuwang,’ to help eradicate infant and child mortality locally, and hopefully, around the world if I become Miss World,” she added.

Parungao also said she offers her crown to her family who “traveled for eight hours” just to watch the pageant.

“I want everybody to know that I’m a pure Filipino. I’m actually Ilocano. My entire family lives in Nueva Vizcaya,” she clarified, responding to observations that the pageant has crowned only those with foreign blood since 2011.

Parungao said she would immediately prepare for the 2015 Miss World pageant which will be held in Sanya, China, on Dec. 19.

Though this is Parungao’s first foray in the national pageant scene, she is not necessarily new to beauty contests. In 2014, she was hand-picked to represent the Philippines in the Miss Asia Pacific World Talent Competition where she placed fourth.

For her Miss World Philippines stint, Parungao bested veterans of other national pageants.