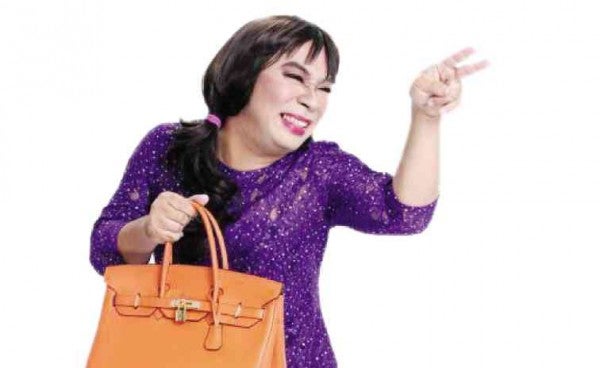 Comedy is a tricky thing. I really think that it’s harder to make people laugh than cry. A good comedian must be able to gauge the sensibilities of his audience and have perfect timing.

Wally Bayola has mastered the art of comedy. His wacky portrayal of Lola Nidora in “Eat Bulaga’s” phenomenal kalyeserye is one for the books. Kudos to Wally, AlDub (the Alden Richards-Maine “Yaya Dub” Mendoza pairing) and the rest of the hit noontime show’s cast for reinventing Pinoys’ simple yet pure joys.

Here’s my one-on-one with Wally:

How has your Lola Nidora role changed you as a person and a performer?

I have played many characters in the show but Lola became popular thanks to AlDub. And of course, as a performer, I feel like I leveled up.

How similar is the character to your real grandmothers?

To be honest, Lola Nidora is based on my maternal grandmother. So Lola Nidora is often strict. You have to know household chores. My advice to Yaya Dub on wearing proper clothing is inspired by her. You couldn’t slouch and be inattentive in church or she’d pinch you.

What is the magic behind the AlDub tandem?

It still puzzles people. Young or old, they’re fans of AlDub. Even men are thrilled by it. It moves people.

Do you think that Maine and Alden will end up together for real?

What’s your advice to aspiring comedians?

What I learned in comedy is nonstop education, research, and figuring out the tastes of people. So you need to adjust.

Do you feel pressured to keep outdoing yourself?

Not really. What I learned from Joey de Leon was, you should love your job, whatever it is. Love it so that you won’t feel pressured, so that you will always feel inspired and energetic. But I’m not really pressured because of the writers of “Eat Bulaga.”

How do you and Jose Manalo handle artistic differences?

When we perform, we complement each other. We support each other like a duo in comedy bars.

What does your family think of Lola Nidora?

They’re surprised when I come home as Wally, like they’re not used to me anymore. After the show, they watch again online. Sometimes, they get mad at me for being strict with AlDub! They’re affected.

How do you manage to put on a brave face while your daughter Marianne is battling the Big C?

The show is only a few hours. After work, that’s when I feel sad. Her college batchmates are graduating.

Which of Lola Nidora’s words of wisdom is your fave?

Are those words your own or from the script?

It’s from the script but I added a sermon—“make sure your intentions are pure.”

What’s your fave candid moment with Alden and Maine?

With Yaya, I have many. I asked her once, how does she keep herself from feeling nervous? She said, “Happy thoughts—think of your crush!”

If your life story were a movie, what would the title be?

Filipino viewers can now tune in to the regular broadcasts of Bloomberg TV Philippines, the country’s first 24-hour English business news channel. It started airing on Oct. 5 over Cignal TV.

It will also be available to millions of smartphone and Internet users in the country through the channel’s digital platforms. Adding punch to its nationwide reach is its seasoned news anchors and program presenters, Quentin Pastrana, Shawn Yao, JP Ong, Jean de Castro, Regina Lay, Tony Abad, Michael Alimurung and Rod Nepomuceno. Their topnotch team will keep the business scene in full bloom.

Lifestyle, the premier cable channel (Sky and Destiny Cable, channel 52), whips up two exciting original shows for the last quarter of 2015 that will inspire its viewers to lead a healthy lifestyle and harness their creativity.

Bravo to the lifestyle hub of modern Filipinos for nourishing all of our senses!

Congratulations to my good friends in Macau, John and Rose Aquino, for the recognition that their travel agency, Chinoy Travel and Tours,  bagged at the PAL Awards 2015.